Ashes more important than ever as Test cricket comes under threat 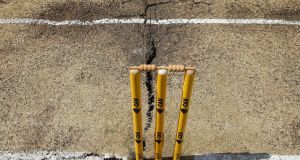 While a Test match might remain the sternest challenge of a player’s mental and technical capabilities, the longer form of the sport is now far from being the most lucrative. Photograph: Getty Images

Ireland take on Pakistan in their first ever Test match next summer, after being granted full member status by the International Cricket Council (ICC) earlier this year.

It is a landmark fixture for Ireland, which will not only reflect their new place at world cricket’s top table, but also finally allow Irish cricketers to try their hand at the purest form of the sport.

Change in modern society has been reflected in modern cricket. There is a desire for everything to be faster and louder – reflected in the rise of Twenty20 cricket over the past decade.

Many players, England’s Irish batsman Eoin Morgan being the perfect example, are now one-day specialists – mercenaries expensively recruited by franchises around the world to play in 20-over competitions where big bats, short boundaries and garish kits are the order of the day.

But while tournaments such as India’s IPL and Australia’s Big Bash continue to grow, Test match cricket remains the holy grail – hence the buzz around Irish cricket when they were voted in, alongside Afghanistan, in June.

But while a Test match might remain the sternest challenge of a player’s mental and technical capabilities, the longer form of the sport is now far from being the most lucrative.

Test cricket is under threat, and the impending introduction of a world championship in 2019 – in a bid to give each match more significance – is likely to be the thin end of the wedge as the ICC looks for ways to freshen up the game.

And this is why cricket needs the Ashes – its crown jewel – more than ever. This winter’s renewal is the perfect opportunity to show the world why Tests are still best.

Next Thursday, the first Test between England and Australia gets under way at the Gabba in Brisbane – the opening act in a five-match drama which will decide the destination of a tiny urn and provide one country with bragging rights until 2019.

The Ashes was incepted in 1882 after England were beaten on home soil by Australia, prompting UK newspaper the Sporting Times to lament the death of English cricket in a mock obituary, “the body will be cremated and the ashes taken to Australia”.

The following winter England set sail for the other side of the world in a bid to reclaim those ashes – and thus one of sport’s truly great rivalries was born.

This winter will be the 70th Ashes series. Improbably, the two sides are currently all square when it comes to series won – with 32 victories apiece and five draws.

But while there is parity between the two old enemies, history has tended to favour the home side – and the task facing Joe Root’s tourists this winter is considerable. Indeed, of the 12 series played in Australia since 1971, the tourists have emerged victorious just twice.

England’s struggles down under, particularly in the modern era, have only served to strengthen the rivalry. The English cricket team – particularly during the nadir of the 1990s – have often come across as hapless, downtrodden underdogs, without the sense of entitlement and arrogance carried by their rugby and football counterparts.

The Aussies, however, put pay to the stereotype that cricket is a gentleman’s game. They are hard-nosed, macho, in your face bullies – desperate to grind the weak-minded Poms into submission.

Everything seems bigger and brasher in Australia – it is like cricket on steroids. Their grounds, for example, are stadiums – 100,000 will pack into the Melbourne Cricket Ground for this year’s Boxing ( St Stephen’s) Day Test match.

In comparison England’s biggest Test venue, Lord’s, has a capacity of 30,000 – while Old Trafford and Headingley, northern England’s two great cricketing outposts, can accommodate a combined 43,500 supporters – only slightly more than what will fill out the Gabba next week.

The culture of watching cricket in England is changing, and is increasingly becoming more about day drinking rather than the game itself. But this has long been the case in Australia, where a Test match is often a five-day window to drink slabs in the sun.

This manifests itself in a hostile and merciless atmosphere, in cricketing terms at least. Take the opening day of the series in Brisbane in 2002, when England’s young fast bowler Simon Jones was goaded as he lay prone on the floor after rupturing his cruciate ligaments. The spirit of cricket? Not down under, mate.

Because the Ashes is played between two nations from opposite sides of the globe, the way supporters consume it is different to other events. Next week’s first Test gets under way at 12.0am GMT – requiring a late night, or an early start, if you want to see any considerable chunk of play.

This winter BT Sport has the rights ahead of Sky – who will have to come up with some creative scheduling for their new dedicated cricket channel – but most people will be limited to a diet of highlights on the news at breakfast and tea time.

This heightens the mystique of an Ashes series down under. The azure skies, lush green outfields and golden pitches of the Melbourne Cricket Ground, WACA Ground and Sydney Cricket Ground provide a stark contrast to the wind and rain of an Irish or British summer. It’s the same planet, but another world.

Cricket is also a sport which lends itself to radio like no other. This writer remembers being on a family holiday in Co Mayo in 2005 on the final morning of the seminal Edgbaston Test, sat with the radio precariously tilted in the one spot of the front room where the grainy strains of Test Match Special would filter through the speakers.

Meanwhile my dad was taking my elderly great aunt, a nun, to mass in Louisburgh – where he waited outside in the car, listening as England desperately pushed for the one wicket needed to level the series at 1-1.

With Australia three runs away from an improbable victory, Steve Harmison finally forced last man Michael Kasprowicz into a mistake. Birmingham erupted, and elation spread through the airwaves and out to the very west of Ireland.

The hosts are firm, odds-on favourites to regain the urn this winter, following England’s 3-2 victory on home soil in 2015.

On paper, the two side’s batting line-ups are fairly similar. Australia have captain Steve Smith and opener David Warner to steady a fairly inexperienced top order, whereas England are heavily reliant on Root and opener Alastair Cook – who captained England to victory down under in 2010/11.

The Aussies’s advantage, however, lies in their bowling attack – with the trio of Mitchell Starc, Josh Hazlewood and Pat Cummins all liable to do damage on quick, bouncy Australian wickets.

The tourists are also hamstrung by the absence of their star player, Ben Stokes, who is currently the subject of a police investigation on suspicion of causing actual bodily harm outside Bristol night club in September.

The absent Stokes is England’s talisman. An inspirational if confrontational character – almost in the Australian mould – he is exactly the type of player you want on your side when taking on the Aussies in their own back yard.

For many people, the Ashes will pass them by like a ship in the night – but for others, a captivating two months await, as two of sport’s oldest rivals get ready to lock horns once more.