Saints make it seven straight wins with hammering of Bills 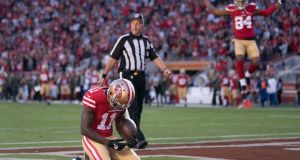 San Francisco 49ers wide receiver Marquise Goodwin (11) takes a moment to pray after scoring a touchdown against the New York Giants at Levi’s Stadium. Goodwin and his wife had lost their baby son due to complications during pregnancy hours before the game. Photograph: Kyle Terada/USA Today.

San Francisco 49ers wide receiver Marquise Goodwin helped his team win their first NFL game of 2017 just hours after his wife lost their son during complications in her pregnancy.

Goodwin scored a touchdown as the 49ers beat the New York Giants 31-21. He then celebrated by blowing a kiss to the sky and appeared to offer a prayer before being joined by his team-mates. Video of the play and celebration was tweeted by the NFL.

The wide receiver caught a pass from quarterback CJ Beathard for an 83-yard touchdown during the first half at the MetLife Stadium.

Following the game Goodwin posted on his Instagram account that he and wife Morgan’s son died due to complications during the pregnancy. He filed a moving photo of him touching hands with his dead baby son.

Goodwin asked for his followers to pray for him and his family. He wrote: “I just wanna thank those who’ve genuinely prayed for morganakamomo & myself through out this pregnancy. Unfortunately we lost our baby boy due to some complications, and had to prematurely deliver him early this morning around 4am.

“Although we are hurt, I am grateful for the experience and grateful that God blessed me with a wife as courageous and resilient as Morgan. The pain (physically, mentally, & emotionally) that she has endured is unbelievable. Please Pray for the Goodwin family.”

The New Orleans Saints made it seven straight NFL wins with a franchise-record six rushing touchdowns to hammer the Buffalo Bills 47-10.

The Saints lost their first two games this season but have been relentless since and comfortably lead the NFC South, with a new and improved defence and ground game to the fore.

Mark Ingram rumbled in for a hat-trick as he and Alvin Kamara each exceeded 100 yards. Kamara, rookie Trey Edmunds and even veteran quarterback Drew Brees also ran for touchdowns.

Minnesota Vikings quarterback Teddy Bridgewater, out injured since the start of last season, was visibly emotional on the sideline as he returned to back up Case Keenum, who threw touchdowns to Stefon Diggs, Adam Thielen and David Morgan in a 38-30 win over the Washington Redskins.

Minnesota’s NFC North rivals the Chicago Bears and Green Bay Packers met at Soldier Field, with the Packers coming out 23-16 winners thanks to touchdowns from Ty Montgomery and Davante Adams.

The Detroit Lions joined the Packers on 5-4, two games behind the Vikings, with a hard-fought 38-24 success against the winless Cleveland Browns as Matt Stafford threw touchdown passes to Theo Riddick, Eric Ebron and Golden Tate.

Rookie JuJu Smith-Schuster was once again the star for the Pittsburgh Steelers as they pulled out a 20-17 win over the Indianapolis Colts to move to 7-2. The rookie receiver had 97 yards and a touchdown and though Chris Boswell sent one late field goal attempt off the upright, he nailed the game-winner as time expired.

DeMarco Murray’s three touchdowns saw the Tennessee Titans win a back-and-forth game against the Cincinnati Bengals 24-20, the Jacksonville Jaguars beat the Los Angeles Chargers 20-17 thanks to AJ Bouye’s interception in overtime and the Tampa Bay Buccaneers won 15-10 against the New York Jets.

The Atlanta Falcons powered past the Dallas Cowboys with a 27-7 victory, as Adrian Clayborn took advantage of a missing Tyron Smith from the Cowboys’ offensive line and set a franchise record of six sacks.

The Falcons, earning a well-needed boost after losing four out of their five previous games, ended the Cowboys’ three-game winning streak.

In Denver, Tom Brady threw three touchdown passes to help the New England Patriots coast to a 41-16 victory over the Broncos, their 12th consecutive road victory, while in Los Angeles, the Rams eased past the Houston Texans 33-7.