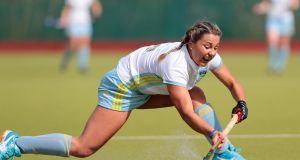 There’s no change at the top of the Hockey League with UCD, Cork Harlequins and Pegasus all picking up wins over the weekend, Loreto the only one of the seven teams below the leading contenders to also register a victory.

Both sides had their chances in a lively encounter, with Railway goalkeeper Grace O’Flanagan pulling off a string of saves against the defending champions.

Cork Harlequins, now the league’s only unbeaten side, had a more comfortable time of it on Saturday when first half goals from Rebecca Barry, Roisin Upton and Naomi Carroll gave them the points against Pembroke Wanderers, that win keeping them in second place, a point behind UCD.

Pegasus, meanwhile, stay third after a 3-0 win away to bottom club Monkstown but move three points clear of Ards who lost 1-0 at home to Loreto, Jessica McGirr deflecting home a short corner in the second quarter.

And Trinity picked up a valuable point away to Belfast Harlequins, one that lifts them above Pembroke and out of the bottom two. Ailish Long gave the students the lead before Jenna Watt levelled for the Ulster side.

Champions Dundalk march on as Cork City remain goalles 22:00
New man Marshall sees Shamrock Rovers past Waterford 21:39
City Island to return to hurdles and take on Paisley Park in stayers’ 20:50
McIlroy takes his foot off the pedal and will skip the Honda Classic 20:01
GPA asks delegates to vote against hurling black card at congress 18:33
Here is your handy guide to sport on television this week