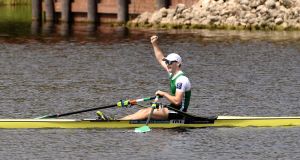 Paul O’Donovan had the standout performance for the Irish contingent on the first day of the New Zealand Rowing Championships, while UCD’s Max Murphy continues to impress in his stint down under.

Paul O’Donovan, the world champion in the lightweight single sculls, competed in the Premier (heavyweight) single and took third in a heat won by Robbie Manson, who last year set the fastest time in the world. O’Donovan raced hard and his time of seven minutes 20.17 seconds was just 0.11 of a second off Mahe Drysdale’s winning time in the other heat. Drysdale is the Olympic champion in the event.

Manson and Drysdale qualified for the A Final, while O’Donovan will compete in the repechage on Wednesday.

On a day of rain and hot competition, the Ireland international contingent generally opted to conserve their energy for the last-chance repechages.

The men’s pair of Mark O’Donovan and Shane O’Driscoll had to win their heat to progress directly to the A final; with no realistic chance of qualifying directly they took fourth. A four made of the three O’Donovans and O’Driscoll finished fourth in their heat, and the double of Gary O’Donovan and Paul O’Donovan placed fifth in a race for lanes.

Murphy, who is competing for Waikato in New Zealand, was part of the club’s senior four which won their heat and progressed directly to the final, while the pair featuring Murphy placed third in a heat.

Kevin Neville of NUIG, competing for Wairau, also hit the mark, qualifying for the senior double semi-finals. Neville and Eamon Power move on to the repechages in the senior and club singles respectively.