On 30km biathlon event: ‘It was one of the most gruelling experiences I ever had’ 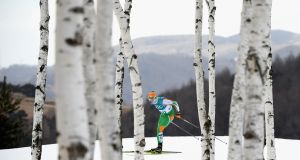 The race, which was won by Norway’s Sim Hegstad Krueger, consisted of a 15km classical ski, followed by 15km freestyle.

And it proved dramatic, with Krueger recovering from a fall to take gold, as Norway secured a cleansweep of the medals in temperatures of -9 degrees (c).

He said: “Despite not feeling 100 per cent I’m extremely proud to get my Olympic debut for Ireland. It’s a big honour. I dreamed about this since I was 10 so this was a big day for me.

“The last 10km was like nothing I’ve ever experienced before, it was just horrendous. But when you are able to finish in the Olympic spirit you just have to be proud.

“It was really windy so it was so important to be in a group to block the wind and unfortunately I wasn’t able to be in group for the last 15km so I had to struggle in my own battle.

“In that third lap I just gave it everything. I was seeing stars. It was one of the most gruelling experiences I ever had.”

Westgaard is qualified for three more events in Pyeongchang, however due to a recent illness he might decide to concentrate on the the 50km - his best event - on February 24th.

Elsewhere Clare’s Patrick McMillan will have to wait to make his Winter Olympics debut after the men’s Downhill skiing was postponed due to 45mph winds.

The event will now take place on Thursday 15th, with McMillan’s other event - the men’s Super-G - moving to Friday 16th.

McMillan said: “This is very normal. Skiing’s an outdoor sport and, in Downhill we often have to wait for the weather.

“I’m actually happy because I’ve had three days of very good training on the course and now I can get a day’s rest.”

Alpine skier Tess Arbez is next up for Ireland, taking part in the Giant Slalom on Monday at 4:45am-6-25am (Irish time).

Only 25 Irish athletes have previously taken part in the Winter Olympics (19 men and six women). The first Irish team competed 20 years ago in Nagano, Japan.