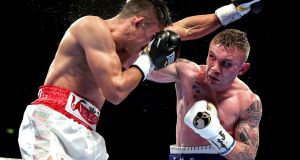 Carl Frampton is among the fighters linked to MTK Global. Photograph: William Cherry/Inpho

Boxing management company MTK Global, which represents 29 Irish professionals, has announced that it is pulling out of Ireland because Irish media repeatedly slander and vilify the company and its stable of professional boxers.

In a statement released on Thursday, Sandra Vaughan the CEO and Sole Shareholder of MTK Global distanced herself and MTK Global from Daniel Kinahan, who was originally involved in setting up the company.

“Despite announcing MTK Global cutting all ties with Daniel Kinahan in February 2017, and announcing a full management buy-in by myself in October 2017, the Irish media have continued to vilify MTK Global in all and any mention of Irish boxing and MTK Global signed boxers,” said Vaughan in a written and video statement.

She added that it had left her with “no choice but for MTK Global to pull out of the Republic of Ireland for the immediate future”.

Vaughan cited a boxing event due to take place on Saturday February 3rd featuring five MTK boxers. But the show was cancelled when host Citywest Hotel pulled out. This, she said, came after “widespread media propaganda.”

In her statement Ms Vaughan distanced herself from Kinahan and said that there are absolutely no connections between MTK and crime.

“None of the new management team or owners, nor any of the Irish boxers signed with MTK Global, have any connection with crime, yet many Irish media continue to drag up past affiliations and sensationalise and slander MTK Global and their stable of boxers,” said Vaughan.

“As CEO I cannot and will not allow this to continue. How are we ever meant to move forward as an organisation when we keep being dragged into the past by media?

“Our legal team are now dealing with this matter and will be issuing legal letters to a number of Irish media houses today.”

MTK also accused the Irish media of lionising boxers, such as Barnes and Conlan, who both won Olympic and World Championship medals as amateurs and then, “turning their backs on them.” Conlan was world amateur champion prior to the Rio Olympic Games and Barnes won two Olympic bronze medals.

“Many of these fighters have won Olympic or world title medals at amateur level and are considered national heroes for their achievements. Yet the minute they turned professional, the Irish media turned their backs on them and instead have taken money out of their pockets by vilifying them in the press,” she said.

“This witch-hunt by Irish media has left me with no choice but for MTK Global to pull out of the Republic of Ireland for the immediate future. We will not host fight nights in Dublin nor will any MTK Global athletes fight on a Dublin card.”