Volvo Ocean Race Diary part 11: I was so close to quitting after 6,000 miles of misery 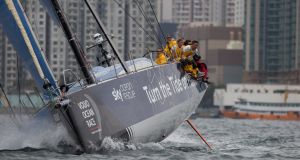 If you’ve been following this log, it probably won’t be a surprise that I came really close to quitting after completing the last leg of the Volvo Ocean Race from Melbourne to Hong Kong. Really close.

It was 6,000 nautical miles of pure misery or at least that’s how I remember most of it and I was in a dark place when I stepped ashore.

For sure, we sailed through some of the most beautiful waters of the world, we led the fleet for almost a whole week and there were fun times on board. But deep down, deep inside I was very unhappy.

Unhappy that I wasn’t fulfilling my potential on board, unhappy that maybe I had made the wrong choice in committing to this 40,000 nautical mile circumnavigation and unhappy at the prospect of quitting that my frame of mind was ultimately leading to.

Most of all, I felt totally alone in these feelings and helpless: at sea for nearly three weeks, non-stop and in an unrelenting competitive environment that leaves no time for relaxing or private chats with crew-mates.

Racing a 65-foot stripped-out racing yacht where your life revolves around a four-hour on, four-hour off watch cycle for days on end intensifies a negative mind-set incredibly.

This may as well be another sport – it is that different from the ten years of campaigning for the Olympics.

Sailing my Laser Radial – a single-handed dinghy – can be extremely lonely at times but at least you can come ashore and have the support of your coach and friends in the fleet and go home at night.

Racing a 65-foot stripped-out racing yacht where your life revolves around a four-hour on, four-hour off watch cycle for days on end intensifies a negative mind-set incredibly.

Don’t get me wrong, the sailing is amazing. You come on watch and straight into an intense effort at maximising boatspeed, water crashing over the bow and decks, really exhilarating stuff.

But five days later, you come on deck and the sails are still set the same way, the boat is set up exactly the same because there is nothing left to try to make a difference and then the doubts start creeping in.

Plus, as a newcomer to ocean racing, I’m mad keen to do as much as possible on board but I realise I need to accept that assimilating into this type of sailing will be a slow-release.

At the time, so close to the day-to-day intensity of my situation it left me feeling very negative and doubting my ability to continue. And I nearly fell victim to this mindset.

But after coming ashore and relaxing with my team-mates and other crews, it soon dawned on me that pretty much everyone I met experienced similar, questioning feelings. I wasn’t the only person feeling de-motivated from the intensity of spending 20 days at sea.

Before the race, I thought that huge seas, freezing cold and seasickness would be the biggest challenges but actually these were okay

Incredibly, I was chatting with one skipper from another team who freely-admitted that four days out from Melbourne he was already asking himself how soon could he get ashore.

It took the break from ocean racing in Hong Kong to come to terms with this and also how I should adapt, especially as the race is only approaching the halfway point.

Overall, I never expected anything like this to happen. Before the race, I thought that huge seas, freezing cold and seasickness would be the biggest challenges but actually these were okay. But managing the negativity is a far bigger surprise and possibly not really spoken of much or if it has, perhaps it really needs to be experienced first-hand to prepare for.

There really isn’t one cause of it: part might be to do with my own expectations of myself and desire to perform to my best. But switching from a solo campaign into a team environment requires a different approach: I really get that now.

And our team in particular is unlike many of the others in the fleet in that we have a far higher number of under-30s on board and almost all of us come to the campaign with a huge amount of high-end racing experience, just not ocean racing experience.

We have an America’s Cup sailor, a Super Yacht crew, an offshore multihull sailor, another Olympian plus myself with an actual Olympic medal. All of us, in the space of five months have gone from nearly zero ocean miles to more than 10,000 – each!

The regular pathway into this end of the sport is to serve your time, slowly working your way up through the ranks of shore crew, delivery crew, gaining sea-time and all the skills and even trades before easing into the senior ranks of the best paid professional sailors.

But now we do know our way around our boat and are useful in almost every position on board and for sure, while our results to date have reflected our growing experience I now have a renewed determination to finish this race.

At the last In-Port race in Guangzhou, I doubled-down on just getting on with my physical tasks, spending less head-time thinking out tactics or stuff that in a team-environment is handled differently than someone sailing in a totally self-reliant mode.

As we leave Hong Kong again, this time heading for New Zealand and retracing much of the route of the last leg, I’m also determined not to let the Doldrums get the better of me. It was the boredom of being becalmed for five days non-stop that really made the negative feelings worse.

Not only have I downloaded the full Netflix Outlander series to my iPad for the boring off-watches in the Doldrums but thanks to the Irish Consulate in Hong Kong, who hosted all the Irish people involved in the race at a reception along with visiting Erasmus students, I’ve been given a personal supply of Tayto that I’ve stuffed into my kitbag for the leg.

I know, they’ll be crushed to bits but that doesn’t matter: crushed or not Tayto is still Tayto so I’ll have my supply of treats of the next three weeks.

Speaking of treats, ten hours of my birthday last week was spent motoring from Hong Kong up-river to Guangzhou. We had pizza on board followed by a huge birthday cake that we couldn’t all finish. As we approached the Chinese mainland, we were due a customs inspection and couldn’t have any food on board. I couldn’t let my cake go to waste so I gobbled the last quarter and felt sick for the rest of the day, not helped by the crew arrival party turning into my birthday celebration.

Maybe getting back out to sea will be a good thing.

Overall, we had a great visit to Hong Kong and China and I’m hoping this will turn out to have been a watershed stop-over for me, learning to cope with the side-effects of ocean racing, adapting to a big-team environment and, hopefully the start of us making good on our potential in this race.