Winter Olympics: ‘It was really close but that’s how snowboarding is’ 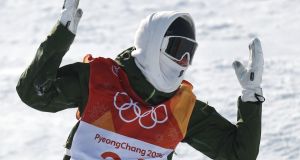 But when he threw in his toughest trick in the second round and slipped slightly on the landing, he failed to improve on his first round score of 65.50 and the chance slipped agonisingly away from him.

O’Connor finished 18th of the 29-man final and while he was disappointed it was quite an achievement considering he tore all of the ligaments in his knee just 16 months ago in a fall during competition.

O’Connor commented following the event, “Obviously I would like things to have gone a little better but I’m down here at the bottom of the pipe in one piece with a smile on my face in my second Olympics so I can’t complain,” he said.

“I knew I had to go for absolutely everything in that second run. Unfortunately, just on that last landing, I kind of slipped out a little bit.

“It’s the biggest trick of my run, a front-side 1260 which is three and a half rotations and here in PyeongChang was the first time I’d done it in over two years. It was really close but that’s how snowboarding half-pipe is. You’re either on it or really close but not quite there.”

O’Connor was competing in his second Winter Olympics and had finished 15th in the half-pipe in Sochi where he was also 17th in the slopestyle event.

Clare skier Pat McMillan made his Olympic debut in the Combined Downhill on Tuesday morning where he was very happy to complete the first element - the downhill run - in one minute and 25.77 seconds, placing 61st overall.

“It was great to finally get into my first race and get that under my belt. I had a fairly smooth run. I had a few line errors towards the bottom and got a little bit pushed back in my seat but otherwise it was better than my training runs and great training for my main event which is the downhill.”

McMillan did not complete the second slalom as he is focusing on Wednesday’s Downhill.