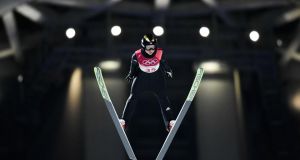 Maren Lundby of Norway outsoared her rivals on a night of snow, wind and biting cold to win the women’s Olympic ski jumping competition on Monday.

The 23-year-old put in a final jump of 110 metres on the normal hill at the Alpensia Ski Jumping Centre to score an emphatic victory over Germany’s Katharina Althaus, who took the silver medal, and Sara Takanashi who won bronze for Japan.

With weather conditions steadily worsening, the competition reached an exciting climax as the top three from the first round made their final jumps in reverse order, starting with Takanashi.

The Japanese made a leap of 103.5 metres to move into the lead, but applauded sportingly as Althaus responded with 106.0.

With the final jump of the competition, Lundby withstood intense pressure to fly four metres further and take the gold.

In a sport where scoring is based on a combination of distance jumped and judges’ marks for technique, and adjusted for wind conditions, she finished with 264.6 points, 12 ahead of her nearest rival, having carried a lead of just 2.2 into the second round.

The Norwegian was the strong pre-competition favourite after dominating World Cup jumping this season.

The athletes were forced to contend with night-time temperatures of -11 Celsius and frequent gusts of wind that delayed some jumps and left them huddling in blankets or beating their knees for warmth as they waited.

The waits got longer towards the end of the first round, with defending champion Carina Vogt of Germany forced to take off her skis and flex her leg muscles as she waited around five minutes to take off down the ramp. She ended the competition in fifth place.

The competition was watched by a sparse but enthusiastic crowd of spectators, including a vocal contingent from Japan, some wrapped up like polar explorers against the chill.

It was the second time that women have competed in Olympic ski jumping, having joined the programme in Sochi in 2014 after years of struggling to prove they were as capable as men at launching themselves off a snowy ramp at speeds of up to 90 km/h and flying over 100 metres through the air.

They still only take part in the smaller normal hill contest, not the large hill nor the team event.