For figure skaters, early morning competing is the hardest manoeuvre

Early starts at Winter Olympics facilitate US broadcaster, but also lead to some big falls 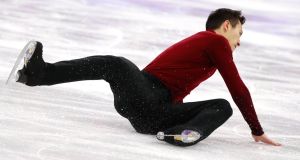 Patrick Chan of Canada falls after a triple axel during the men’s single free skating event at the Gangneung Ice Arena, South Korea, on Monday. Photograph: How Hwee Young/EPA

Figure skaters, like Broadway actors, are accustomed to giving matinee and evening performances. Breakfast performances, not so much.

But, to accommodate television audiences in the United States, skating usually begins here at 10am, which allows NBC to broadcast live to a prime-time audience at 8pm.

Skating’s timetable switch from evening to morning has forced competitors to reassess their sleeping and training habits. And the early starts, along with nerves, seemed to have contributed in undermining some of the initial performances at the Games.

Monday’s first skater, Mikhail Kolyada of Russia, fell on his opening four-revolution jump, which effectively steamrollered his Elvis impersonation. Patrick Chan, a three-time world champion from Canada, won the team free skate but fell on a triple axel. He also fell last Friday in the short programme of the team competition, as did Nathan Chen of the United States, a gold medal favourite in the singles competition.

“I don’t think any of us in our entire careers, even mine, have ever skated this early, or with this type of schedule,” Chan told reporters on Friday. “I definitely think that played a role. But we’re not in control of that.”

The Olympic arena has been half empty when the competition begins midmorning, though spectators have been drifting in later. The energy level appeared particularly low on Friday as the team event began.

The clumsiness exhibited by the men’s skaters seemed contagious. Aljona Savchenko of Germany, who with her partner Bruno Massot is a gold medal favourite in the pairs competition, fell after being tossed into the air on a manoeuvre called a twist lift.

Massot told the Associated Press: “It is always more difficult when you have an early practice and then the competition takes place two hours later. Maybe that schedule is good for the TV but not for the athletes.”

The general response among skaters and coaches, however, has been to acknowledge that while the start times are not ideal, they should not be used as an excuse for rickety performances. The schedule has long been known, and everyone has had time to plan accordingly.

The Japanese ice dancers Kana Muramoto and Chris Reed have been turning on lamps that mimic sunlight as soon as they awaken to rev up their bodies.

The Russian ice dancers Ekaterina Bobrova and Dmitri Soloviev travelled to South Korea from Moscow last month to begin adjusting to the six-hour time difference. Tessa Virtue and Scott Moir of Canada, the 2010 Olympic ice-dance champions and 2014 silver medallists, have long embraced sports science. They have their sleep patterns monitored, they said, and use wearable technology to have such functions as their breathing patterns scrutinised while on the ice.

“This is right in our wheelhouse,” said Moir, who with Virtue won both the short programme and the free skate in the Olympic team competition and anchored Canada’s bid to win the gold medal. “This is not terribly difficult for us because it’s what we do every day. We usually have training on the ice at 7.30am, sometimes 7am. That means we’re up at 5am.”

The vast majority of elite skaters train regularly in the morning. But many often do not wake up or go to sleep as early as they are doing at these Games. Many Olympic skaters said they were going to bed here between 7pm and 8pm and waking up as early as 4am.

US Figure Skating, the US national governing body, considered the smallest details to provide its athletes a good night’s sleep and ensure an on-time arrival to perform. Officials brought mattress pads, knowing beds in the athletes’ village were hard. And all American skaters were placed on floors 3, 4 and 5 of the high-rise village apartments the United States is using.

“The last thing you want to do is be waiting on an elevator, wondering if you’re going to get one or walk down 20 flights of stairs,” said Mitch Moyer, the American skating team leader.

For Bradie Tennell, the American women’s champion, though, this is not much of a change from her regular schedule. At home in suburban Chicago, she arises each day between 4:15am and 4:30am and is usually at her rink by 6am to teach young skaters before beginning her own training.

She appeared unruffled in her performance in the Olympic team competition on Sunday. “It’s when they have the schedule to compete, so that’s when I’m going to compete,” Tennell said.

Each day they perform at the Olympics, skaters have a training and warm-up session several hours before the competition begins. On Monday, the five men competing in the team free-skate practised at 7am. At a standard event, they may go back to their hotel for a few hours, or even much of the day, taking a nap, gathering their thoughts and soothing their nerves.

Some skaters have been returning to the athletes’ village briefly before they perform, but others have remained at the rink. It can be difficult to concentrate while sitting around a locker room with other competitors as the pressure builds.

“I don’t think I’ve ever been so nervous at 10am in my entire life,” the American Adam Rippon said after Monday’s performance.

After winning a silver medal, Bobrova, the Russian ice dancer, said with a laugh that she was relieved to get a break from the upside-down schedule before the traditional ice-dancing competition begins next week.

This is her third Olympics, but the first time she has had to worry about getting into full makeup by breakfast. – New York Times