Ross accuses MMA of ‘dragging feet’ after death of fighter 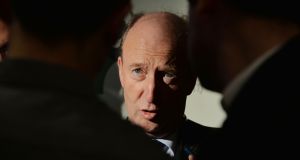 Minister for Sport Shane Ross has accused the Irish Mixed Martial Arts Association (IMMAA) of deliberately dragging its feet in establishing safety standards following the death of fighter Joao Carvalho after a bout in 2016.

The Minister was speaking after a coroner’s inquest yesterday gave a verdict of death by misadventure caused by blunt force trauma to Mr Carvalho’s head sustained during a match with Irish fighter Charlie Ward at the National Boxing Stadium in April 2016.

The Portuguese national (28), a father of two, lost consciousness soon after the bruising encounter and was rushed to hospital on the floor of an ambulance before succumbing to his injuries two days later.

“It appears to me that MMA leaders here in Ireland are deliberately dragging their feet on the establishment of appropriate governance and safety standards,” Mr Ross said in a statement released this morning.

He continued: “The absence of a national governing body for MMA in Ireland is unacceptable. All sporting organisations in Ireland are autonomous and self-governing.

“Today I call on the IMMAA to do the right thing – take the steps that are required to safeguard your fighters and prevent needless injury and loss of life.”

Minister of State for Sport Brendan Griffin also spoke of his “terrible disappointment” at the slow progress made by the IMMAA since the death of Mr Carvalho.

“It is now almost two years since Joao Carvalho’s passing. I am terribly disappointed that there has been so little progress made on establishing appropriate governance arrangements.

“Sport Ireland demands excellent standards of governance, child protection and competitor safety, amongst other things, before it will formally recognise a sport. In the case of the IMMAA, we have not seen any sign of the effort required,” he said.

Meanwhile, Sport Ireland chief John Treacy has said mixed martial arts in Ireland urgently needs leadership and a governing body, with the sport needing to take responsibility for itself to ensure the best standards are in place to protect its members.

He told RTÉ’s Morning Ireland that he had been at the inquest yesterday that heard that Mr Carvalho sustained 41 blows to the head in the Total Extreme Fighting contest at the National Boxing Stadium.

“It was frightening to listen what he went through,” he said.

Mr Treacy said that Sport Ireland had set up a working group following the MMA fighter’s death that recommended a governing body should be set up to ensure best practices were put in place and for the safety of fighters.

Sport Ireland recognises sporting bodies when they get to the stage where they have a governing body, he explained.

“The only people who can regulate MMA are the people involved in the sport themselves. They need to take leadership.

“The report laid out a road map. There is a martial arts committee which governs 30 martial organisations. They have the technical expertise.”

He said that as a matter of urgency there is a need for safeguards to be put in place so that fighters are protected. Sport Ireland has no regulatory powers, he added.

Sport Ireland offered to help to set up a governing body, he said: “They need leadership and to take responsibility for the activity of this organisation.”