Patrick Mahomes takes his time but delivers when it matters most 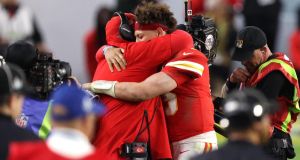 For three-and-a-half quarters, we waited for a ‘Mahoment’. It seemed as though we would be waiting in vain. Super Bowl LIV was meant to belong to Patrick Mahomes, the 24-year-old quarterback with a rocket launcher for an arm and a league MVP award already in his locker.

Instead it was passing him by.

With just under 12 minutes remaining in the game, and his team trailing 20-10, Mahomes threw his second interception. It was a bad throw, intended for Tyreek Hill on a crossing route but arriving behind the receiver, who bobbled it into the hands of San Francisco’s Tarvarius Moore.

At that point, Mahomes had completed 18 of 29 passes for 172 yards and no touchdowns. Hardly the numbers expected of a player who had thrown for eight touchdowns in his two previous playoff games, one who was already being compared to the all-time greats.

Mahomes has been reminded often enough this week that Tom Brady won his first Super Bowl at 24, and Joe Montana just a year older than that. Yet there was another, less encouraging, comparison that hung over him here, in Miami of all cities. Dan Marino went to the Super Bowl in his second season as an NFL starter for the Dolphins – the same career stage that Mahomes finds himself at now. The parallels are striking. Marino was the first quarterback ever to throw for 5,000 yards in a season, and shattered the league record by throwing for 48 touchdowns in 1984 as well.

Mahomes, last year, became just the second player ever to throw for 5,000 yards and 50 touchdowns in a single campaign. Marino wound up on the losing side at Super Bowl XIX, throwing a pair of second-half interceptions as the Dolphins slumped to defeat against these same 49ers. As Moore led San Francisco’s defenders off the field in celebration after his fourth-quarter pick, it seemed as though history was repeating. What if Mahomes’s career were to go down the same path as Marino’s, and he never returned to this stage again?

But this story had a different ending. The Chiefs’ defence dug in, forcing a punt and putting the ball back in Mahomes’s hands with eight minutes and 33 seconds remaining. He needed fewer than six of those to turn this game on its head. Suddenly Mahomes was, well, Mahomes, the freelancing, rocket-armed quarterback who does not know when he’s beaten.

He threw to Hill short, long, and long again. He dematerialised in front of defenders just at the moment when they thought they finally had him in their grasp. Perhaps things still would have ended differently if it weren’t for a pass interference call against Moore in the end zone on third-and-10 from the San Francisco 21.

Mahomes capitalised by hitting Travis Kelce in the back of the end zone one play later. Suddenly, the 49ers were drowning. They gave the ball back, and the Chiefs returned it to the end zone, twice. In a blink of an eye, the Chiefs had scored 21 points, unanswered. The only surprise is that we were surprised at all. Kansas City had overcome double-digit deficits against two pretty good teams already in this playoff run. What’s a 10-point gap to overcome, to a team that trailed by 24 against Houston, and already had the lead by half-time?

Andy Reid has a reputation as one of the great game-planners, a man who never loses when he has a bye week, yet it is the Chiefs’ in-game adjustments that have been to the fore in this run. This night belongs to Reid as much as Mahomes, named as the game’s MVP. Only five head coaches in NFL history have won more games and each of those has at least two Super Bowls to their name.

Reid was surely already destined for a place in the Hall of Fame, but he may well cherish the ring that he earned tonight even more. Reid has earned himself a place forever in the hearts of Kansas City’s fans. The Chiefs had waited half a century for this return to a Super Bowl. The last time they were on this stage, Mahomes’s father was yet to be born.

Those fans turned out in huge numbers at Hard Rock Stadium. They were doing all they could to make their team feel like it was back at Arrowhead, ending the national anthem with that familiar ‘home of the Chiefs!’ refrain. All that was missing was the smell of brisket wafting up from the tailgate. Reid and his team have that to look forward to upon their return home, for what will be a memorable celebration. With Mahomes’s career ahead of him, there should be plenty more yet to come. - Guardian