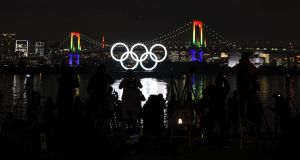 As of midnight on February 3rd there were 20 confirmed coronavirus cases in Japan. Photograph: EPA

The Japanese prime minister says his government is in close contact with the World Health Organisation to prevent the coronavirus outbreak having an impact on the Tokyo Olympic and Paralympic Games this summer.

More than 17,000 people have contracted the virus in China, with 361 of those cases resulting in death.

As of midnight on February 3rd there were 20 confirmed cases in Japan, and the Kyodo news agency reported that the country’s prime minister Shinzo Abe told a parliamentary session: “We will closely work with the World Health Organisation and others to make sure that preparations for the Olympics and Paralympics will steadily proceed without impact (from the outbreak).”

Kyodo also reported that the Olympics minister, Seiko Hashimoto, said a meeting would take place between Olympic organisers and the relevant sporting bodies, possibly this week.

The outbreak has already forced the postponement of the World Indoor Athletics Championships in Nanjing until March 2021, with the event originally due to take place next month.

A number of Olympic qualifying events have been postponed or rescheduled following the outbreak.

The China Open snooker tournament, the last ranking event before the sport’s World Championship in Sheffield, has also been postponed with organisers working with World Snooker to find a suitable date later in the year.

There are still question marks around the Formula One’s Chinese Grand Prix, due to take place in Shanghai on April 19th, and also over the Volvo China Open, a golf event on the men’s European Tour which is due to take place between April 23rd and 26th.

A golf event on the women’s LPGA Tour, the Blue Bay on Hainan Island, has been cancelled.