Olympic marathon could start at 5am to keep it in Tokyo 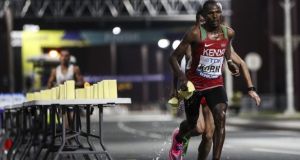 Laban Kipngetich Korir of Kenia splashes water during the marathon in Doha at the World Athletics Championships which was marred by serious heat. Photo: Maja Hitij/Getty Images

The marathon and walking events at next summer’s Olympic Games could start at 5am to prevent them being moved hundreds of kilometres to Japan’s northernmost island of Hokkaido due to heat concerns.

Government officials in Tokyo toyed with the idea of proposing a new marathon start time of 3am but are now leaning towards 5am, Kyodo news agency said.

The move follows a decision by the International Olympic Committee [IOC]last week to move the events to the city of Sapporo, 800km north of Tokyo, to avoid exposing athletes and spectators from sweltering temperatures similar to those which caused huge problems at the recent marathon during the World Athletics Championships in Doha.

Confirmation of a relocation to Sapporo, host of the 1972 Winter Olympics, would anger fans who have already secured tickets and booked accommodation in Tokyo. Distance running is hugely popular in Japan, and the marathons are expected to draw large crowds.

Rising concern over the capital’s sweltering summer temperatures had already forced the Games’ organisers to shift the start times for the men’s and women’s marathons to 6am, and the men’s 50km walk final to 5.30am, to give athletes time to complete the courses before temperatures soar.

The IOC decision drew an angry response from Tokyo’s governor, Yuriko Koike, who said the IOC, the International Association of Athletics Federations and the Tokyo Games organising committee had not consulted the metropolitan government before making their “sudden” decision.

She said Tokyo had made efforts to reduce the impact of the heat, such as installing cooling mist machines and surfacing roads along the route with a heat-reducing reflective material. “Of course, the athletes-first approach is extremely important,” Koike said.

Noting that the Games, which run from July 24th to August 9th, were less than 300 days away, she added: “To choose Sapporo so suddenly … why Sapporo, who decided this? There was no discussion, and I have a lot of doubts about having this thrust on us. We have made many preparations and there’s no change in my thinking that it should be held in Tokyo.”

Koike is due to meet John Coates, head of the IOC’s coordination commission, later on Friday, but the Tokyo government is not expected to formally propose any scheduling changes until the commission meets in the Japanese capital at the end of the month, according to the Kyodo.

Temperatures in Tokyo during July and August often exceed 30C, with high humidity expected to add to the athletes’ discomfort. Temperatures in Sapporo during that period are as much as six degrees cooler during the day. The last Summer Olympics in Tokyo, in 1964, were held in October. – Guardian