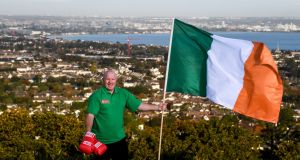 Irish boxers have found to their cost over the years, most recently at the Rio Olympic Games, that the sport does not always respect them as much as they do it.

To that end 1992 gold medal winner Michael Carruth believes that next year’s qualification tournaments for Irish boxers in London and Paris will be a levelling force in the sport. As yet no boxer from Ireland is Tokyo qualified.

Following years of financial scandals and mismanagement at the highest levels, the International Olympic Committee (IOC) has removed the International Boxing Federation from any Olympic involvement until it undertakes wide ranging governance and personnel changes. It’s a mess.

“The two good things about the qualifiers is they are in the west of Europe. It’s in London and it’s in Paris. Let’s be honest, if you are going over to those Eastern Bloc countries they vote for one another. It’s like the Eurovision Song Contest. Ireland will never win that again because they are voting for themselves. Right.”

Since 1928 boxing has won 16 Olympic medals compared to 15 medals won by all of the other sports combined, athletics with seven and swimming with four (from Michelle Smith in Atlanta) trailing in second and third place.

Carruth believes Ireland can qualify six boxers for Tokyo and from that six there is the potential for medals in both the men and women’s teams.

“The bottom line is we have a great calibre of team male and female,” says Carruth, who won gold as a total outsider 27 years ago. “I am visualising six will qualify. That’s my call, three boys and three girls.

“I’ll just mention one from either team, Kellie Harrington [a previous world champion who did not compete in this year’s World Championships due to injury]). Her hand is okay. And then Kurt Walker, who got beaten in the quarter-finals of the World Championships. That’s world class.”

After three boxing medals in Beijing from Kenneth Egan, Barnes and the late Darren Sutherland and four in London including a second from Barnes, Conlan, John Joe Nevin and  Taylor’s gold, Rio was a crushing disappointment.

But from that low point Carruth can see another Irish upswing for the European qualifiers in The Copper Box at London’s Olympic Park in March and in the final world qualifier in Paris next Spring.

“That’s six of a team,” says the Barcelona Olympic champion. “And from that we’ll definitely win two medals. It’s realistic.”