Rockabill VI powers ahead to scoop Boat of the Year award

Sailing: Mix of inshore and offshore races give Paul O’Higgins and his team the edge 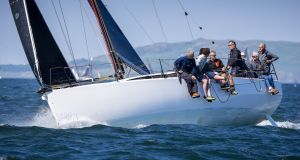 A rock-solid track record combining results and crew turnout has led to Paul O’Higgins and his team on Rockabill VI being given the overall Boat of the Year award by the Irish Cruiser Racing Association.

The JPK1080 from the Royal Irish Yacht Club in Dún Laoghaire had a mix of inshore and offshore races count towards the win, including a successful defence of the Dún Laoghaire to Dingle Race in June.

The final result was only decided at the recent Autumn League at Howth YC, where O’Higgins’s team edged ahead of Manchester’s Nigel Biggs in the ICRA standings to win the title by a single point.

“This award is also about the crew and everyone who keeps the boat racing,” O’Higgins told The Irish Times. “It’s about having fun on and off the water with the people who have sailed together for a long time.”

While O’Higgins topped the standings leading the Division 0 fleet, other familiar names from the major events of the season led their respective classes including John Maybury’s J109 Joker II, also from the RIYC in Division 1; Biggs on Checkmate XVIII in Division 2, who qualifies for the award as a regular competitor in Ireland holding an Echo handicap certificate; Rory Fekkes’s F’n Gr8 from Carrickfergus Sailing Club; while Windsor Lauden and Steffi Ennis’s venerable Club Shamrock Demelza from Howth is again proving unbeatable in White Sails on the east and south coasts.

However, although Rockabill VII has been announced as the award-winner, when the actual presentation will occur is unknown.

In previous years, ICRA staged an annual conference in late Autumn post the sailing season at a central venue such as Kilkenny or Limerick.

But a dispute arose amongst the leadership committee of the association in early 2018 centred on various issues including a decision to hold the annual championships in Galway in August that year.

The crisis affecting the volunteer-led organisation deepened further when the championship was not actually sailed due to a combination of weather and access to the dock area at the venue.

A change of leadership earlier this year saw the championship successfully sailed from the Royal St George YC in Dún Laoghaire.

A revamp of the Echo handicap system is also proving popular in that previously winners under this system were often identical to IRC-rating system winners, resulting in a better spread of prizewinners at events.

While the date of the annual conference has yet to be fixed, what is known about next season are the major events that will count towards the 2020 Boat of the Year award.

The major championship-level event will be the ICRA National Championships that will be held as part of the Royal Yacht Club’s tricentenary celebration Cork 300 plus the 705-mile Round Ireland Yacht Race in June.

National regattas include the Wave Regatta at Howth YC and the annual Calves Week in Schull.

Regional events that will be counted are Kinsale YC’s April League and the RCYC’s October League in the south; WIORA week and the Round Aran Race in the West; Dublin Bay Sailing Club’s overall Thursday series, plus the Autumn League at Howth YC.

Offshore races also count and include the Kingstown to Queenstown race, plus the third cross Irish Sea ISORA race starting from Ireland.