In it for the long run: 13 people have finished all 39 Dublin Marathons

Behan there, done that – ‘the Colonel’ at 79 is the oldest of the 13 to have completed all the runs 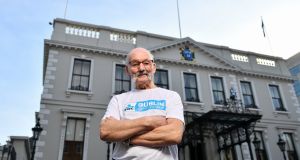 Frank Behan at the Mansion House in Dublin. He is the oldest of 13 people to have completed all 39 Dublin Marathons since 1980. Photograph: David Fitzgerald/Sportsfile

Lucky number 13 or 13,283.4 miles later – depending on which counts most. There is no such thing as a short cut in a marathon, only the 26.2 miles between the start and the finish, and after 39 editions of the Dublin Marathon only 13 runners have come that far.

It also makes for 1,021.8 miles each, no easy achievement given so much can and often does go wrong over the classic distance.

Better still, all 13 runners have every intention of starting and finishing number 40 this Sunday as the Dublin Marathon celebrates its 40th anniversary with another record entry of 22,500.

There can only ever be one first, and like most of the 2,100 people lining up at the start of the first Dublin Marathon, on the October Bank Holiday Monday, 1980, there was no guarantee they would be back for the second, and definitely not the 40th.

For those lucky 13 – and be sure luck played some part – the memories become more precious with each year. Among them is Mary Nolan Hickey, the only woman to have finished all 39 so far.

“As someone once told me, this is like a club that no one else can join,” she says. “And once you leave you can never get back in. It’s all a little mad, but as long as there’s still the enjoyment I’ll keep going.”

Among them also is Martin Kelly, who never imagined that some day he would be talking about Dublin Marathon number 40 because he was not yet 18 when he signed up to run that first one in 1980.

“Every year you stop and think ‘where have the years gone?’ I know that sounds like an old man now, but it’s true. I’ve gone to the start line the last 39 years thinking that, but still I’ve loved every minute of them all.”

Perhaps the most impressive of those 13 is Frank Behan, who turned 79 back in March, and despite the passing years has never once failed to start or finish Dublin. In 1980 he was 39 years old, and not getting any younger. Still, at no point in those 39 so far did he feel like not finishing, nor feel he couldn’t go through it all again.

Behan is now the oldest of the 13, also affectionately known as “the Colonel” Behan, still sporting a dandy handlebar moustache perhaps more reminiscent of 1880 as 1980. As a member of Clonliffe Harriers he had already run a few of the Clonliffe 20-mile runs, which were going since the 1940s, typically starting in Balbriggan and finishing at Clonliffe College.

“So once the Dublin Marathon came on the scene, we were thinking that’s just another six miles longer. After the first Dublin Marathon, over the years then you got more of the overseas entry, and you’d be meeting people in the bars afterwards, and it just gripped me. It felt like it was a new chapter in my life, meeting all the wonderful people that you do meet.”

From his home in Cabra close to the Phoenix Park in Dublin there are plenty of training options: for Behan it sounds like the “less is more philosophy!” has served him well over the years: “There is no secret, to tell you the truth. Motivation, dedication yes, and the right persuasion too.”

His training routine has remained largely unchanged over the years, as has his morning race routine. “Basically I train once a week, but religiously! At 7am on a Sunday, out the gate, onto the canal, down towards the Navan Road, into Blanchardstown, good bit around there, down through Castleknock, into the Phoenix Park, and follow one of the trails to the Cabra gate, maybe go a bit longer, but eight to 10 miles in all.”

Still, nothing in sport is easier said than done than the marathon. Behan was recently at his doctor for an annual check-up, and told in no uncertain words to keep doing whatever he was doing. “So, no intention of retiring, no.”

Tipp and Cavan stir the soul on underdog’s day; Kane gives Mourinho his mojo back
Here is your handy guide to sport on television this week