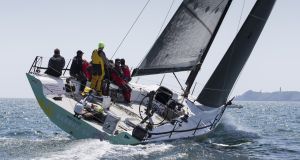 Baraka Gp, skippered by Niall Dowling, won the line honours in the Volvo Round Ireland Race and the overall win is as good as decided. Photograph: David Branigan/Oceansport

Although official confirmation is pending from Wicklow Sailing Club, Niall Dowling and his team on Baraka Gp are the unbeatable overall winners of the Volvo Round Ireland Race and will lift the trophy at Friday evening’s prize-giving ceremony.

That presentation has already been put off by three hours to allow more of the original 56-strong fleet to complete the 705-mile course as light winds have dominated the final stage on North coast and Irish Sea approaches to the finish.

It was those same light winds that gave Dowling the edge he needed to make good on his line honours win on Wednesday afternoon with overall victory under IRC handicap as well as individual class win.

His crew of 11 counted seven professional sailors including navigator Ian Moore from Carrickfergus and Boat Captain James Carroll from Dun Laoghaire. Three other crew-members are lifelong sailing friends of Dowling’s.

Placing full credit with his team and especially Carroll who has co-ordinated preparation for the race over the past 18 months, the Round Ireland win is a prelude to another campaign in 2019 for the Rolex Fastnet.

Notably, the lead-in time to deliver a winning project using the chartered Ker 43-footer as well as competing in the Fast 40+ circuit in Britain is indicative of the detailed planning required.

But with the overall win as good as decided, attention now switches to the remainder of the podium where Chris Power-Smith of the Royal St. George Yacht Club in Dun Laoghaire holds second overall with Aurelia on the provisional standings.

“That was the toughest round Ireland I’ve ever done – hard yards but I loved it!” commented Maurice “Prof” O’Connell of North Sails Ireland, the only pro sailor on Aurelia. “We had an epic match race with Team Fujitsu for two days, the whole way up the Atlantic coast.”

The Irish Defence Forces team on Joker 2 led by Cmdt Barry Byrne of Wicklow narrowly missed edging Power-Smith from second overall but may hold the third overall place and win the Services trophy as well depending on how the venerable Cavatina skippered by Ian Hickey fares overnight.

The 40-year old two-times past winner of the race needed to finish the race by seven o’clock on Friday morning to upset the overall podium standings.

Likely to be one of the most memorable races in recent years due to the sunshine and spectacular views of the coast of Ireland that the optimum routing provided, a total of nine boats have been unable to complete the course.

By Friday evening’s prize-giving, it is likely that a couple of back-markers will still be at sea, possibly taking more than a week to complete the course.