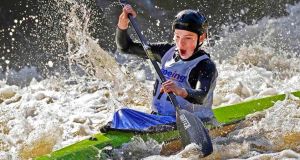 Ronan Foley won gold for Ireland at the canoe marathon European Championships in Metkovic, Croatia on Thursday. The Kilcullen man became K1 junior champion with an outstanding mix of racing and clever tactics.

Three paddlers broke away on the second lap of six: Foley, Thorbjorn Rask of Denmark and Vince Petro of Hungary. They stayed in the lead – with Foley often at the peak of the three boats – for most of the rest of the race.

Foley made a move to break free of the trio on the portage on the fifth lap. He sprinted clear and clambered into his boat ahead of the other two. It did not work; he yielded soon after and let Rask and then Petro catch up.

“I wanted to see how they would do; they buckled a little,” Foley explained. On the final portage, he sprinted clear and it worked. “I had them,” he said.

Foley also won gold at the World Cup in Portugal in May.