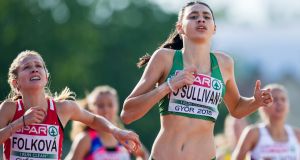 Ireland’s Sophie O’Sullivan on her way to finishing first in her heat of the European Under-18 Athletics Championships at Gyor in Hungary. Photograph: Sasa Pahic Szabo/Inpho

Patience Jumbo-Gula highlighted an excellent evening session for Irish athletes at the European Under-18 Athletics Championships with a championship record in the girls’ 100m of 11.59 seconds in Gyor, Hungary.

The St Gerard’s Dundalk sprinter got an excellent start in her semi-final with the wind reading +0.7m/s and runs in Friday’s final at 7:09pm Irish time.

Earlier Sophie O’Sullivan (Ballymore, Cobh), a daughter of former world champion Sonia, produced a strong run to win her heat of the 800m in 2:12.23 to advance to Friday’s semi-final. Molly Brown (MSB) just missed out after an opening lap of 72 seconds in the first heat and finished fourth in 2:16.94.

Conor Morey (Leevale) went in Semi-Final 1 of the 100m where there was a false start but a late recall gun saw him and some of the others run the full race. It was subsequently rerun 10 minutes later where he came sixth in 11.17 – evidently tired having two 100m races in quick succession.

Robbie Brady nets as Burnley and Everton share the spoils 14:47
Fiji wrap up Covid-hit campaign with a win over Georgia 14:32
Antoine Rozner pips Andy Sullivan in Dubai smash and grab 12:54
Wallabies fall short as they draw with Argentina in the rain 11:38
Emiliano Grillo storms into the lead in Mexico 08:36