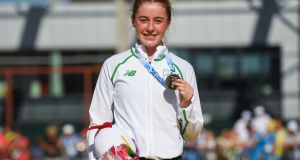 It’s been a while since any Irish athletics team boasted so many medal prospects, especially with the O’Sullivan name among them. Even if it’s only the European Youth Championships they won’t be any easily won either - but will provide a taste of the next generation and in more ways than one.

Gyor in Hungary is playing host as the championships get underway on Thursday morning, and among the Irish team of 23 athletes is Sarah Healy, the standout gold medal favourite in the 1,500 metres - her time of 4:09.25 some 10 seconds faster than the next best entrant.

Healy warmed up for Gyor with a 2:02.76 for 800m last week, also the fastest time at under-18 youth level in Europe, although the 17-year-old from Killiney in south Dublin is running the longer distance only. In that sort of form it will take an exceptional performance to beat her, Healy already proving her championship credentials by winning the European Youth Olympics last summer, and the Irish senior indoor 3,000m title earlier this year.

There are still two Irish entries in the 800m, with Sophie O’Sullivan making her first appearance in the green vest, thus following in the footsteps of her mother Sonia, who still boasts more medals than any other Irish athlete in history. Still only 16, O’Sullivan’s 800m best of 2:05.79 ranks her third fastest among the 50 event entries, behind Britain’s Keely Hodgkinson (2:04.26) and Sweden’s Gael de Coninck (2:05.43). There are heats and semi-finals to navigate before Saturday’s final, and tactics will come into play as much as times.

Coached by Tim O’Shaughnessy back at the Melbourne Track Club, O’Sullivan will have her mother on hand in Gyor for any advice, and also running the event is Molly Brown from the Metro St Brigid’s club in Dublin, who has a best of 2:10.12.

There are other standout medal prospects in the sprints as both Patience Jumbo-Gula and Rhasidat Adeleke look to continue their excellent form. Both daughters of Nigerian parents, but competing for Ireland since their earliest years, Jumbo-Gula, from St Gerard’s AC in Dundalk, is ranked second fastest in the 100m with her 11.51, while Adeleke, from Tallaght AC and still only 15, goes in ranked fifth with her 11.60. Adeleke also runs the 200, both also part of the sprint medley.

Not that it’s all about the medals: the European Youth Championships were designed to further ease the transition to senior level and the response has been impressive - 50 European nations represented, with 1,063 athletes in all.