NFL round-up: Tom Brady gets Patriots back on track 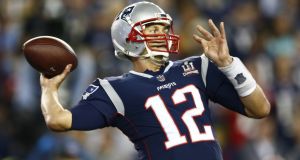 Tom Brady helped the Patriots get back on track against the Saints. Photograph: CJ Gunther/EPA

Tom Brady threw for 302 of his 447 passing yards in a 30-point first-half explosion and New England rebounded from a season-opening loss to Kansas City with a rout of New Orleans.

It was the first time in Brady’s career - spanning 273 games - that he threw three touchdown passes in the first quarter. He hit three different players - running back Rex Burkhead for 19 yards, tight end Rob Gronkowski for 53 and wide receiver Chris Hogan for 13 - and finished 30 of 39 for 447 yards.

The Atlanta Falcons built a big lead over the Green Bay Packers and, unlike in the Super Bowl against the New England Patriots last season, held on for a victory this time.

The Falcons led by 24 points after three quarters and didn’t wilt after two fourth-quarter touchdown passes by the Packers’ Aaron Rodgers in a 34-23 victory Sunday night in the opening regular-season game at the $1.5 billion Mercedes-Benz Stadium.

Atlanta’s Matt Ryan completed 19 of 28 passes for 252 yards and a touchdown. Julio Jones had five catches for 108 yards, and Devonta Freeman rushed for 84 yards and two short touchdowns for the Falcons (2-0).

Quarterback Trevor Siemian shook off a pair of costly turnovers to throw for four touchdowns, and the Denver Broncos dominated the Dallas Cowboys in a game that was suspended for about an hour due to the danger of lightning strikes.

Denver’s defense capped its performance with a flourish as cornerback Aqib Talib returned an interception 102 yards for a touchdown, stepping in front of Dak Prescott’s end-zone pass intended for Dez Bryant and sprinting down the sideline for the score.

Siemian completed 22 of 32 for 231 yards and had touchdown passes of 10 and 6 yards to wide receiver Emmanuel Sanders, along with a 16-yard scoring pass to C.J. Anderson and 2 yards to tight end Virgil Green.

Two second-half touchdowns from running back Kareem Hunt on runs of 53 and two yards helped Kansas City (2-0) pull away from Philadelphia (1-1).

Kansas City had gone ahead for good with a 15-yard touchdown pass from Alex Smith to tight end Travis Kelce that put the Chiefs up 20-13.

Running back Marshawn Lynch carried 12 times for 45 yards and scored on a 2-yard touchdown in his first home game with the Raiders.

The Carolina Panthers relied on relentless defense and three Graham Gano field goals for a victory over the Buffalo.

The Bills (1-1) put together a potential winning drive, moving to the Carolina 32 in the final minute before quarterback Tyrod Taylor threw incomplete to rookie receiver Zay Jones at the Carolina 2 on fourth down with nine seconds left.

Roethlisberger threw a 27-yard touchdown pass to Martavis Bryant to cap the Steelers’ second possession and found JuJu Smith-Schuster for a four-yard shovel pass in the second quarter as Minnesota fell to 1-1.

Wilson overcame a poor passing performance on a rainy afternoon to put together a 10-play, 82-yard drive that included several scrambles for first downs before throwing the go-ahead touchdown pass to Richardson.

Dawson kicked the winner after free safety Tyrann Mathieu intercepted Indianapolis quarterback Jacoby Brissett at the Colts 22 on the first play of overtime.

Cody Parkey kicked his fourth field goal, a 54 yarder with 65 seconds remaining, to send Miami (1-0) past the Los Angeles Chargers (0-2)

Charger rookie Younghoe Koo’s 44-yard field goal with five seconds left was off the mark. It was the second straight week Koo had failed to win or tie a game in the closing seconds.

The Bucs turned two of the takeaways into touchdowns - a 13-yard pass from quarterback Jameis Winston to wide receiver Mike Evans and a 1-yard run by Jacquizz Rodgers.

Bears quarterback Mike Glennon completed 31 of 45 passes for 301 yards, but was haunted by a pair of critical second-quarter errors.

Joe Flacco threw a pair of touchdown passes and Baltimore (2-0) forced five turnovers in the victory over Cleveland (0-2).

Flacco completed 25 of 34 pass attempts for 217 yards and an interception.

Cleveland rookie quarterback DeShone Kizer left with a migraine midway through the second quarter but returned.

Tennessee (1-1) forced three turnovers and scored on their first five drives of the second half to defeat Jacksonville (1-1).

The Redskins jumped to a 13-0 lead and never trailed. The Rams caught up to tie it, 20-20, in the fourth quarter, but never led.

1 Munster beat Glasgow to keep their winning streak going
2 The Offload: Ireland are stuck in no man’s land
3 Mickey Harte is the new Louth football manager
4 Blunt Ireland’s lack of variety fails to penetrate England defence
5 How a visit from his barber helped Kyle Sinckler get back to his best
Real news has value SUBSCRIBE