World number one has now won 16 majors, but talk is still about rivalry with Federer 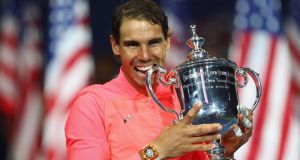 Rafael Nadal of Spain with the championship trophy after he defeated Kevin Anderson of South Africa in the men’s singles finals at the US Open in Flushing Meadows. Photograph: Clive Brunskill/Getty Images

In three words, Rafael Nadal captured the essence of his tennis career and his life: “Very happy, no?”

It was getting late at Flushing Meadows, a place where the Spanish clay-court supremo was never supposed to thrive but where he has appeared in four finals, won three titles and won 53 of 64 matches. Only a few hours earlier, he had neutered the power of the big South African Kevin Anderson to take his tally of majors to 16, again just three behind Roger Federer.

Nadal so often finds a way. And, whether or not he wins, he has the knack of putting his efforts in a wider context, with that Latin upward inflexion and question mark, even in affirmation. For the muscled man of Majorca, happiness is a warm sweatband. If he puts the work in and does not let himself down in terms of effort or strategy, he leaves the result to the tennis gods. It is difficult to recall him ever being less than 100 per cent genuinely respectful of his opponents, but he is equally unimpressed if he himself plays poorly.

The world number one knew he was better than Anderson, and not just by the margin of 28 places in the ATP rankings. He had his measure from the first strike to the last. Anderson knew it too, of course, but played his part, making the most of his first grand slam final, and was warmly received by the sometimes boisterous crowd of 23,000 in the Arthur Ashe Stadium.

This is a bearpit of a sporting arena, with plenty of space around the designated playing area to run and stretch, but no place to hide – and Nadal pursued his prey like a hunter, threading those viciously top-spun forehands into all corners as Anderson’s long legs refused to tell him any lies: this was hell.

The 6-3, 6-3, 6-4 scoreline was a mere detail. There was hardly a moment in the two hours and 27 minutes the torture lasted when Anderson was a threat. He did not even take Nadal to deuce until the final game of the match – a futile effort, as it happened, but worthy of praise.

Anderson’s strength was his serve. He had monstered the aces chart of the tournament for most of the fortnight, yet it was Nadal’s that proved more effective. He lost only 15 points on his own serve to Anderson’s 43. That was not the only gap in effectiveness, but it was the crucial one. Defanged, Anderson became a walking target for Nadal’s wicked returns from deep, sometimes 10 metres and more behind the baseline.

It was a strategy he and his uncle Toni had devised with the latest addition to his team, Carlos Moya. This was Toni’s last slam in Nadal’s box. They have been together since Nadal was three years old. Uncle Toni was the coach who orchestrated young Rafa’s switch from right hand to left hand, and what an astute judgment that turned out to be.

He also embedded in Nadal’s psyche the equally important components of respect and perspective. A sometimes taciturn character, Toni was the shield to the outside world, but ensured that his charge conducted himself with grace and respect, which he invariably did. There was an instance in New York a few years ago when they were walking towards a lift in their hotel, alongside an older woman. As they approached, Toni gently tugged on Rafa’s elbow to allow the woman to enter first. Metaphorically, he has been doing that throughout Nadal’s career.

Nadal has always had respect for his elders, but sometimes it is qualified. Whenever asked – or even when not – he insists Federer is better than him, the greatest of them all, in fact. It is a debate that has raged for all the years they have dominated the game, and even when they have ceded their rule to Novak Djokovic or Andy Murray. And here they were in 2017: Nadal aged 31, Federer 36 – and sweeping the slam pool again. There have been few equivalents in the history of sport. When Federer arrived in New York, the discussion was all about whether or not he could win his third major of the season and stretch his career lead over Nadal to 20-15. As we leave, the score has been readjusted to 19-16, a deficit of three that has pertained for some time. However, with two slams apiece this season, they are poised to continue the argument as favourites in the new year.

When they return to Melbourne for the Australian Open, where Federer came from behind against Nadal to win his 18th slam, no doubt he will have repaired the minor damage to his back that he said contributed to his muted performance at Flushing Meadows, although the mighty Juan Martín del Potro was the more significant factor in his downfall in their quarter-final.

The story of Rafa and Roger has woven itself so inextricably into the fabric of modern tennis that, even in the autumn of their years, it has the power to occasionally drown out the parallel narrative of the young contenders. They were supposed to arrive at this final slam of the season as the dangerous new breed, given the absence through injury and/or ennui of the defending champion Stan Wawrinka, Djokovic and Murray. Also missing were Marin Cilic and the man he beat in the 2014 final, Kei Nishikori.

It was as if fate had unlocked the gate to the new era. But Alexander Zverev, Denis Shapovalov, Dominic Thiem, Borna Coric and all the others – including the serially perplexing Nick Kyrgios – failed to enter there. One way or another, they could not last the distance like Nadal did. And that is his enduring talent. From a young age, he has committed himself to the struggle. Winning seven five-setters in two weeks is what he does best. Those young pups, as much as they might want the prize, have yet to learn that skill. In Kyrgios’s case, sadly, he does not seem to even care.

Nadal said a couple of other things in the aftermath of his triumph that mark the man. First, he remembered (perhaps at Toni’s urging) the victims of the earthquake in Mexico alongside those coping with the hurricanes in Florida, and it did not remotely sound like a public service announcement.

Secondly, he remembered Federer. Asked why he and his rival can still summon up the enthusiasm to give their best in what, after all, is just a game, he was measured, not gushing.

“Of course if I will win two grand slams this year and he will not win, we’ll be closer,” he said. “But one more year and he has 19. I have 16. So three is [still a] big difference. I really don’t think much about these kind of things. I do my way. I’m very happy with all the things that are happening to me, [to] win this title again.”

He added: “Being healthy, you see everything more possible, no? With injuries, everything seems impossible. But I still have the passion and the love for the game. I still want to compete and still feel the nerves every time that I go on court.

“When some day arrives that I don’t feel nerves or that extra passion for the game that I feel, will be the day to say, okay, I do another thing.

You said it, Señor. – (Guardian service)