Taking the plunge with my first Liffey Swim 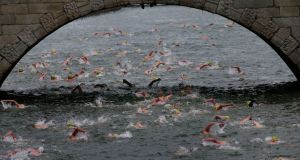 The Liffey swim always brings ripples of excitement to the male and female swimmers who come from all over Ireland and overseas to compete. Photograph Nick Bradshaw/The Irish Times

For many years, I worked in an office overlooking the River Liffey and often thought that it looked inviting. This summer I decided it was the year to take on the iconic Liffey Swim.

I thought of it more of a cultural event than a sporting event. I presumed that at least some of the competitors would be doing it for the experience, taking it handy and enjoying the view, like those who walk the New York marathon.

I thought the challenge would be to hang around the city centre in my swimsuit, and that the swim itself would be easy, maybe even relaxing. I was wrong. Everyone was there to compete.

To qualify for the Liffey Swim you need to complete six sea races, mainly so the organisers can be sure you will be safe. I love jumping into Irish Sea at Vico or the Forty Foot, but I actually hadn’t competed in a swimming race since I was in Primary School.

I consider myself quite sporty so it was a surprise to me when I came last in my first open water race.

The first swim was so cold that I found it hard to breathe and it took a while for me to adapt my front crawl for the waves. Out of the water, I was shaking so much I couldn’t put on my clothes. How could all these other swimmers be so cool about it? Be so much faster and better than me?

Only then did I realise that amount of technique and training involved. I love the free feeling swimming gives me, diving under the surface and lying on my back looking at the sky. But as one of my fellow competitors said ‘That’s not what this is. This is racing’.

On the day of the Liffey Swim, all the women were nervous. They were hoping not to come last, wanted to beat their previous time, avoid letting their club down or wanted to win the cup. It is handicapped which means in theory anyone can be first home.

Despite the nerves, everyone joins in to sing Molly Malone on the pontoon. The historical nature of the race is not lost on any of the competitors; for 98 years Dubliners have been racing up the Liffey.

I decided to enjoy the water and not worry about where I was placed in the race. The women’s swim is held at high tide and with the river current going with us so I was faster than usual. Of course, that means that everybody else was faster as well.

The first thing that happened when I jumped into the Liffey was brain-freeze. I immediately struggled to breathe as my lungs felt tight because of the shock of the cold water. I was gasping for air with every stroke before settling down by the time I reached Mellows Bridge (built of granite 249 years ago, I nearly swam into it).

There is strong camaraderie amongst swimmers but in the end it is a solo endeavour. With your head in the water, there is no chance to share a joke with your fellow competitors, admire the scenery or smile at supporters.

I found it intense compared to running or cycling, as there is nothing to distract you. I spoke to some people who find it meditative, listening to their breath and the splash as their arms slice through the water. Other people are like me, with thoughts running through their head at ninety miles an hour.

It was surreal to pass familiar buildings that I have known all my life; the Yellow Brick Road bead shop where I made jewellery with teenage friends, the Winding Stair, the scene of romantic meals, the Clarence Hotel scene of fabulous hen parties, Wellington Quay where I had my first job, The Four Courts, Sunlight Chambers, Merchants Arch.

What a surprise to see the faces on O’Donovan Rossa Bridge and notice that the Grattan Bridge is made of wood underneath?

Everybody is swimming as fast as they can, everyone is swallowing water, counting the bridges, their breaths, pushing for the finish line.

I think I already knew that O’Connell Bridge was as wide as it was long having read it on the back of a pub toilet door at some point, but it felt like we were under there in the dark for a very long time.

Coming out into the sunshine gave me a boost to push faster for the home stretch. Three more bridges, some more Liffey water swallowed, and I crossed the finish line.

When I reached the famous Dublin Fire Brigade showers (cold, if you were ever wondering), clutching my medal, I realised how much I had put into it.

No doubt all swimmers through the last 98 years have experienced the competitive nature of the race, and to feel that is part of the culture of the Liffey Swim.

Anne-Marie is a Mayo football supporter living in Dublin. This was her first season in open water swimming