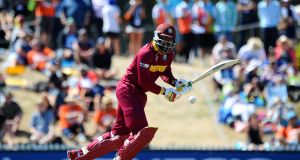 Pending gale-force winds and rain rather than the brute force of Chris Gayle’s bat were on the minds of the Irish players at Stormont on Tuesday as they finished preparations for today’s Turkish Airlines One-Day International Challenge against the West Indies (10.15).

The world’s most destructive white-ball cricketer is back in maroon for a one-day international for the first time since the World Cup quarter-final defeat to New Zealand in March 2015.

The visiting side, nine of whom recently arrived from the Caribbean to join the Test players, decided against a full training session as Storm Aileen made herself known around the Belfast venue on Tuesday afternoon.

Just six of the side that lost the Test series 2-1 to England are in the West Indies 15-man squad for the game, with Gayle being joined by other big names such as Marlon Samuels and Jerome Taylor.

The newcomers are all likely to see action with the West Indies returning to England for a Twenty20 match before a five-match ODI series with England that will test the endurance of players and supporters alike as it extends almost to October.

That may well be the case today, with heavy rain on Tuesday and forecast for overnight set to leave groundstaff in a race against time to get play underway by 10.15. Tickets will be available at the gate.

“Tomorrow’s the first time we play a full member so we put that pressure on ourselves anyway when we go out on that pitch to perform, to put in results against the likes of the West Indies.

“We’ve beaten them before at Stormont, we want to do that again and start off with a bang in terms of full member against full member and get results.”

The weather forecast means it’s unlikely to match the drama of the last meeting between the sides, when Ireland chased down 304 in Nelson to win by four wickets, but any manner of win will provide outgoing coach John Bracewell with a fond memory from his final home game in charge.