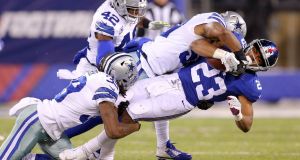 Dallas rookies Ezekiel Elliott and Dak Prescott were their old selves in helping lead the Cowboys to a grinding 26-20 win over the Tampa Bay Buccaneers at AT&T Stadium.

The Cowboys (12-2) rebounded from last week’s loss at the New York Giants to move a step closer to the NFC East title and the No. 1 playoff seed in the conference. Dallas need one win or a Giants loss to clinch both.

Elliott, the NFL’s rushing leader, ran for a season-high 159 yards and a touchdown on 23 carries.

The Oakland Raiders clinched their first playoff berth since 2002 by beating the San Diego Chargers 19-16 on Sunday.

Oakland (11-3) forged ahead on Sebastian Janikowski’s 44-yard field goal with 2:40 left, his fourth field goal of the game.

San Diego (5-9) lost their third straight game and for the 12th occasion in their last 13 games against AFC West foes.

Quarterback Tom Brady led four scoring drives – two after turnovers – and New England’s defence kept the Denver Broncos out of the end zone in a 16-3 victory that clinched the Patriots’ eighth straight AFC East title and the playoff berth that goes with it.

The eight consecutive division titles by New England (12-2) is an NFL record.

It was a rare win in Denver for Brady, who improved to 3-7 lifetime in the Mile High City.

The error-prone Broncos (8-6) lost their hold on the sixth and final wild-card berth.

Ty Montgomery ran for 162 yards and two touchdowns and Mason Crosby kicked a 32-yard field goal as time expired as the Green Bay Packers won their fourth straight game with a 30-27 win over the Chicago Bears at a freezing Soldier Field.

Crosby’s game-winner came after Aaron Rodgers connected on a 60-yard completion on third-and-11 to Jordy Nelson while working with no timeouts to set up Crosby’s third field goal of the game.

Ryan Succop made a last-second 53-yard field goal and the Tennessee Titans pulled off a 19-17 road upset of the Kansas City Chiefs.

Under sunny skies and very frigid temperatures, the outcome was in doubt until the game’s final play when Succop, returning to face the team that drafted him in 2010, was on target.

The Titans improved to 8-6 and remained in playoff contention, while the Chiefs slipped to 10-4.

Tom Savage led a fourth-quarter rally after entering in the second quarter, guiding the Houston Texans to a 21-20 victory over the Jacksonville Jaguars.

Savage replaced Brock Osweiler after Osweiler tossed a pair of interceptions that the Jaguars (2-12) converted into 10 points.

The Texans (8-6) remained tied atop the AFC South with the Tennessee Titans, while Indianapolis (7-7) are one game back.

On a very cold day in Minnesota, Colts quarterback Andrew Luck could hardly have been hotter in leading Indianapolis to a 34-6 blowout of the Vikings.

Luck was 21 of 28 for 250 yards and two touchdowns as the Colts jumped out to a 27-0 half-time lead. The Vikings, hyped about the return of star running back Adrian Peterson to their line-up, slumped to their most lopsided loss of the season. After a 5-0 start to the season, the Vikings are now 7-7.

Chris Boswell kicked a career-best six field goals for the Steelers (9-5) to tie a team record, and set up next week’s AFC North showdown with the Baltimore Ravens.

Cincinnati (5-8-1) gained only 38 yards in the second half after leading 20-9 at half-time. The loss eliminated the Bengals from playoff contention.

The Baltimore Ravens stayed in with a chance to win the AFC North with a 27-26 triumph over the Philadelphia Eagles.

The Eagles almost snatched victory at the end. After quarterback Carson Wentz scored on a 4-yard run, Baltimore’s CJ Mosley tipped a pass and Jerraud Powers prevented it from getting to Jordan Matthews on the two-point conversion attempt.

Baltimore (8-6) can win the AFC North if they defeat the Steelers on Christmas Day and the Bengals in the finale. Philadelphia (5-9) have lost five consecutive games.

LeSean McCoy rushed for 153 yards and two touchdowns and the Buffalo Bills kept their slim playoff hopes alive with a 33-13 win over the Cleveland Browns.

Embattled quarterback Tyrod Taylor was 17 of 24 passing for 174 yards for the Bills (7-7). The Browns lost their 17th straight game dating back to last season and became the fourth team in NFL history to start 0-14.

The Giants (10-4) thus stayed in contention to win the NFC East. The Lions (9-5) remained top of the NFC North.

The Atlanta Falcons kept up their pace as the highest-scoring team in the NFL despite playing the past two games without leading receiver Julio Jones.

Devonta Freeman rushed for 139 yards and three touchdowns as the Falcons broke the team record for points in a season while handing the San Francisco 49ers a 13th straight loss with 41-13 victory.

Atlanta (9-5) are up to 469 points with two regular-season games to go, bettering the 442 points set in 1998 when the team made their lone trip to the Super Bowl.

Drew Brees passed for four touchdowns and 389 yards with no interceptions – becoming the first opposing quarterback to pass for 300 yards against the Cardinals this season – and the Saints downed Arizona 48-41.

The combined 89 points scored made it the highest-scoring game in the NFL this season.

1 ‘For 25 minutes I ran out of oxygen’: Pepe Reina on his coronavirus battle
2 Garry Ringrose to stay with Leinster as he signs two-year central contract
3 Australian rugby staring into abyss as another crisis hits
4 Dr Claire Molloy: ‘It is a privileged place to be, on the frontline’
5 Playoffs set to be moved again as Uefa prioritise European club competitions
Real news has value SUBSCRIBE