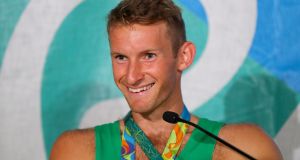 Gary O’Donovan: finished third in the lightweight rankings and fourth overall at the Ireland Assessment in Cork. Photograph: James Crombie/Inpho

Mark O’Donovan and Shane O’Driscoll, fourth in the world in the lightweight pair, filled the top two spots in the single sculls at the Ireland Assessment over six kilometres at the National Rowing Centre in Cork on Saturday.

Gary O’Donovan, the Olympic silver medallist, had a slow first half of his race and could only take third in the lightweight rankings and fourth overall, with heavyweight oarsman Sam McKeown filling third place.

Paul O’Donovan, who would almost certainly have topped the rankings, was exam-tied.

In excellent conditions, one of the rising stars of Irish rowing, Daire Lynch, who is just 18, finished an impressive fifth overall.

On the Sunday, McKeown teamed up with Tiernan Oliver to form a pair which topped the rankings.

Sanita Puspure was by far the fastest woman, and the newly-formed pair of Aifric Keogh and Aoife Feeley also won – but not by much – in their battle with the under-23 pair of Tara Hanlon and Amy Mason. Keogh and Feeley had steering difficulties.

The next compulsory trial is the Irish Indoor Rowing Championships in January and there will be pressure on Gary O’Donovan to reassert himself as the lightweight oarsman nearest in performance to his brother, Paul.