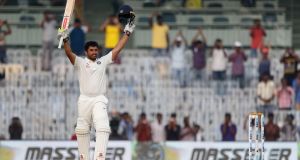 There was not much demob-happiness on view. The Englishmen were still out there in the midday sun, the mid-afternoon sun and when that unforgiving orb began to dip behind one of Chepauk’s redundant stands they were still there chasing the ball on every corner of this foreign field. By then battered bowlers were on the third ball of the innings and it was being belted around the ground by Karun Nair, who became only the second Indian to score a triple century in Test cricket – after Virender Sehwag.

Nair, in just his third Test innings, struck an unbeaten 303 in India’s gargantuan total of 759 for 7 declared, which left England gasping for air. Throughout the day they had tottered on as if stuck in a desert with their water supplies running out rapidly, bearing their increasing discomfort with as stiff an upper lip as they could muster. Here was the agony endured by Ralph Fiennes in The English Patient or John Mills in Ice Cold in Alex and for England there are no happy endings in sight. Their deficit, despite that substantial first innings score of 477, was 270 at the close and there is still a day to go. At least the first five overs of their innings were safely negotiated by Alastair Cook and Keaton Jennings.

The prospect of bowling India out on another sapping day was no more than a mirage with Nair exceeding the efforts of his Karnataka team-mate, KL Rahul, in a devastating assault on a bowling attack equipped with dud ammunition. This was not Nair’s highest score in first-class cricket since he hit 328 alongside Rahul in last year’s Ranji Trophy final. But this was a Test match, where the bowling is supposed to be of a higher standard. Goodness knows how the Indian selectors will sort out their batting line-up in their next Test against Bangladesh after the contributions of the Karnataka kids. By then some familiar names, like Rohit Sharma and Ajinkya Rahane, will be fit again. But it is tough to drop a triple centurion.

The upshot is that England face a most uncomfortable final day at the end of a very long tour. Ostensibly there are no demons in this pitch – it is the flattest encountered in this seven-Test trip – but there are some tired bodies and minds in that England dressing room as well as the seductive prospect of holding one of those lovely boarding cards in their hands on Wednesday morning; in the Indian dressing room, by contrast, there is a hunger for another Test win. The key senior men, Virat Kohli, Ravi Ashwin and Ravindra Jadeja have not forgotten the humiliations of 2014. For England Tuesday could become a very nasty ordeal at the end of an exhausting, chastening tour.

If any Englishman can look back with satisfaction on another day of heat and dust it is Liam Dawson most obviously because he captured his first Test wicket, that of Murali Vijay, who was lbw for a paltry 29, and later amid the mayhem he snatched a second when Jadeja holed out to long-on. Dawson should also be pleased that he was catapulted into the position of being Cook’s most trusted and economical spinner, not that this was very difficult. In all he propelled 43 overs, which was more than anyone else, a significant badge of honour. After all their travails from Chittagong to Chennai Moeen Ali (1 for 190 from 41 overs) and Adil Rashid (1 for 153 from 29.4) looked hollow shells with nothing left to give. Some nasty bowling figures reflect that.

If you bat as long as Nair there is bound to be some good fortune along the way. On Sunday he was dropped by Cook off Jake Ball on 34; on Monday Joe Root was the culprit at slip with poor Ball the bowler yet again and Nair had 217 at the time. Ball, a wholehearted, undemonstrative man, nonetheless sank to his knees when he realised that another drop had deprived him of a second Test wicket. He has bowled with much spirit and purpose in his two Tests but he must be pining for Trent Bridge.

On 246 a tricky stumping chance off Moeen allowed Nair another reprieve. But there was no mistaking the potential of a pocketful battleship, whose mien at the crease is faintly reminiscent of Allan Lamb three decades ago. He possesses a sound technique but there are plenty of modern additions such as the reverse sweep, the slog sweep and the uppercut over the keeper’s head, which blend with drives of classical purity.

The local favourite, Ashwin, contributed a mere 67; he was given out lbw to Jennings on 54 but the review was upheld. In fact Jennings had a much better shout with his first ball in Test cricket when Nair was on strike. Jennings, who bowls little medium pacers, was one of England’s better bowlers on this nightmarish day.

Eventually Ashwin was brilliantly caught in the gully by Jos Buttler, diving to his left, when the score was 616 and the statisticians delighted in the fact that no wicket had ever fallen in Test cricket on this score before. England’s delight was rather harder to discern. Nair now accelerated alongside Jadeja and suddenly 300 was in his sights with Kohli was happy to let him go for that landmark with an array of technicolour shots. So too was an enraptured crowd. Batting will not be quite such a carefree occupation on Tuesday.