Michael Conlan reacts to his 56kg bantam loss to Russian Vladamir Nikitin. The interview with RTE post-match shows his frustration and claims of corruption. Video: RTE 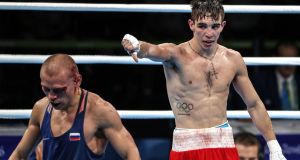 Michael Conlan has recived a maximum International Boxing Association (AIBA) fine of €9,300 for comments made in interview after his elimination at the 2016 Rio Olympics.

The Irish boxer lost out to Russian Vladimir Nikitin in his quarter-final bout on a dubious decision that was widely criticised and made all the more farcical by the fact that the Russian could not take part in his semi-final fight due to injuries inflicted on him by the Irishman.

A furious Conlan gestured with his middle finger towards the judges before calling the AIBA “cheats” in his post-fight interview with RTÉ while also saying that he would never again fight under their jurisdiction.

“They’re known for being cheats and they’ll always be cheats. Amateur boxing stinks from the core to the top. . . today just showed how corrupt this organisation is.”

The 25-year-old from Belfast has now turned pro and will most likely make his debut in New York on St Patrick’s weekend. That means that he is no longer under the AIBA and may never pay the 10,000 Swiss francs – a fact recognised by the governing body in issuing the fine.

The three-man AIBA Disciplinary Commission accept that Conlan was “extremely distraught” after the 56kg bout, but are still sanctioning him for his reaction under Article 6.4 of their Disciplinary Code.

But, changes to the Olympic boxing rules now mean that professionals can fight if they so wish. Therefore the option is open for Conlan to compete at the Tokyo Games in 2020 but, to do so, he must re-register under the AIBA and pay the fine.