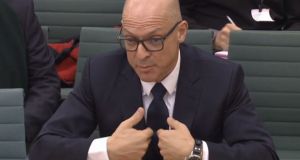 Speaking at a Culture, Media and Sport select committee hearing, Brailsford confirmed the nature of a delivery made by British Cycling coach Simon Cope to Team Sky at the 2011 Dauphine Libere, a key race in the build-up to the Tour de France, after fellow cycling chiefs had pleaded ignorance.

Fluimucil is a decongestant used for clearing mucus.

Brailsford was not party to the issue of the package at the time but subsequently launched an investigation and determined the particulars.

Brailsford also told the committee the medical records of Sir Bradley Wiggins, Team Sky’s lead rider at the event, had been made passed over the Ukad.

“My understanding is they have been made available to Ukad,” he asserted.

Brailsford’s disclosures came after a confusing morning at Westminster, which began with committee chair Collins producing an email from Ukad encouraging questions about the mystery package due to “wide public interest in the subject”.

That appeared to directly oppose the understanding of British Cycling, which claimed Ukad had asked it not to talk about the issue due to their own ongoing investigation into alleged ”wrongdoing” at Team Sky and cycling’s national governing body.

Howden and Dr Gilbert, chair of the organisation’s ethics commission and Brailsford himself all reiterated their surprise at Ukad’s communication with the committee, indicating it represented a sharp change in their policy.

A British Cycling statement issued later said: “Throughout this process UK Anti-Doping have instructed British Cycling not to comment on their investigation and to avoid making our own enquiries as the policing of anti-doping falls wholly within their remit. This was reiterated with specific regard to our evidence to the select committee.”

Several follow-up questions surrounding the efficiency of Cope flying out medical supplies from Manchester to France, via Geneva, when it might be more easily sourced locally were batted back by Brailsford.

“If that was the sole purpose of someone flying out, it would be an extreme step. The facts of the matter are that Simon Cope was flying out anyway,” he said.

“It’s the easiest possible way. He’s got his own store in Manchester, he’s coming out already. It may be where the whole situation has been slightly misled...that the whole purpose of Simon Cope’s trip to the end of the Dauphine wasn’t to deliver a package. He was coming anyway. He was coming and he was asked to bring something from the doctor’s store.”

The earlier testimony of Howden and Gilbert had focused largely on the nature of the package and, while Brailsford’s appearance rendered much of that session moot, it is instructive to note an apparent lack of shared knowledge.

While Brailsford had the key information at his finger tips, the British Cycling chiefs appeared to have a much sketchier understanding of the issue — dictated in part by Ukad’s instructions.

Asked directly if he knew the contents, Howden said: “I don’t know and am not aware of any senior management teams of British Cycling who would know. As soon as the matter came to light we passed the matter over to Ukad.”

Gilbert responded to a question about medical packages being transported around the world by interjecting: “You are making the assumption it is a medical package.

“British Cycling sends packages on a regular basis. We have teams competing around the world and we regularly send out packages which might have anything from pedals to spare shoes. All sorts of things.

“We’ve not looked into this because we have been instructed by Ukad not to look into it.”

At one stage Gilbert agreed it was “bizarre” to deliver a package across international borders without being aware of its contents.

Former British Cycling team director Sutton, who worked closely with Wiggins for much of his career, also appeared.

Leaked Wada documents revealed in September that Wiggins was granted therapeutic use exemptions — essentially doctor’s notes allowing athletes to use medicine that would otherwise be banned — to use the powerful corticosteroid triamcinolone before his three biggest races in 2011, 2012 and 2013, including his famous 2012 Tour de France victory.

He was asked about the package and its relevance to Wiggins and indicated it did contain medical supplies and that those supplies were given to his rider.

“I believe (Freeman) administered the medication,” he said.

“Obviously there was a medical supply he (Cope) delivered. I don’t know what was in the package... whatever it was he would have administered. When the ingredients of the package comes out everybody will be clear. I’m quite sure, 100 per cent, there’ll be no wrongdoing.

“Knowing the kid (Wiggins) for many, many years as far I’m concerned he never worked outside any rules.

“Given the fact Dave Brailsford was probably the pioneer behind clean cycling and created what is probably the cleanest team in the world and set up a zero tolerance programme, there was no wrongdoing there.

“I can’t state strongly enough there was no wrongdoing on any part of Brad and Team Sky.”

Brailsford closed by taking executive responsibility for the damaging episode and said he should have handled the fallout better.

“There’s always lessons to be learned and you start with yourself,” he said.

“I could have done a lot better quite frankly. They (Team Sky riders and employees) don’t deserve to have this shadow cast over them. These are people who are performing fantastically well who don’t deserve that and it pains me that they’ve had any doubt cast over them because of my actions.”