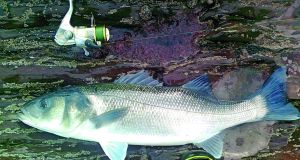 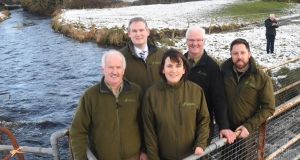 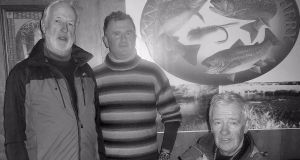 At the charity event at Annamoe Fisheries were, from left, Brian Nally (proprietor); Ronan Meghen (winner) and Stuart McGrane (organiser)

Following successful negotiations by the Minister for Marine, Mr Michael Creed, at the recent fisheries council meeting in Brussels, the European Union has introduced new regulations for the Irish seabass recreation fishery, which will operate on a catch-and-release basis for 2018.

The new rule states: “In recreational fisheries, including from shore, in International Council for Exploration of the Sea (ICES) divisions 4b, 4c, 7a to 7k, only catch-and-release fishing for European seabass shall be allowed. It shall be prohibited to retain on board, relocate, tranship or land European seabass caught in that area.”

The regulation sees a consistent approach being applied throughout the Irish coastline.

Bass anglers have an extremely positive approach to bass conservation, catch and release, and the requirement for good handling in order to maintain the species and their recreational activity.

Anglers, through their conservation-oriented ethos, have been the key stakeholders in supporting research into bass stock status over the past five years by providing catch and fish stock data, which has underpinned provision of scientific and management advice.

According to the National Strategy for Angling Development document, the total direct expenditure of anglers from all markets on Irish bass and sea angling is in the region of €52 million and €116 million respectively.

The Minister with responsibility for inland fisheries, Sean Kyne, has welcomed the funding of €2.2m to 115 angling development and conservation initiatives as part of its National Strategy for Angling Development, Salmon Conservation Fund and Midlands Fisheries Fund.

A selection of projects which received the greater funding includes a development plan (2014-18) for angling, tourism and conservation on the Creeslough Fisheries in Co Donegal which encompasses the Owencarrow River, Glen Lough and Lough Natooey. The award is (€223,750).

In Co Mayo, the erection of disabled angling facilities at Cuilbaun, Tawnaghbeg, Straide and Foxford was secured by East Mayo Anglers’ Association. The award is €154,087.

On the Bunowen River at Ahascragh, Co Galway, a funding of €120,000 was granted to Inland Fisheries Ireland for the construction of a rock ramp.

“I would like to congratulate the applicants who have been awarded this funding. They include fisheries habitat conservation projects and the provision of infrastructure and equipment to allow for improved access to angling. Education/youth initiatives and projects aimed at attracting increased numbers of tourist anglers also attracted funding,” Minister Kyne said.

A most enjoyable get-together during the festive season at Annamoe Fisheries in Co Wicklow proved the ideal tonic for a group of hardy anglers. Considering the lake was frozen over the previous day, conditions on Saturday were ideal and the fish were in biting mood.

Ronan Meghen came out tops with six trout and over 20 were landed and returned. Thanks to Brian Nally for use of his facility and Stuart McGrane for organising the event. A donation will be forwarded to Wicklow Hospital.

At time of writing the early season salmon rivers open have yet to yield a fresh fish. Gale force winds and heavy rain reduced rod days to a minimum. Both the Drowes and Liffey are presently in flood mode. “Apart from a few kelts, we await our first salmon,” Drowes proprietor, Shane Gallagher said.

1 Cheltenham faces criticism after racegoers suffer Covid-19 symptoms
2 Andrew Conway diary: In search of a competitive edge
3 Whole new ball game: Sport will be last duck in the row in return to normal
4 Sonia O’Sullivan: Taming The Tan gave us one last roll of the dice before shutdown
5 Avoid the treadmill at all costs – marathon training in the 2km radius
Real news has value SUBSCRIBE

Greener Pastures: Seinäjoki feels most like home for Tommy Dunne 06:30
‘Every team is in the same position – we all just want to play games’ 06:00
My favourite sporting moment: Shels finally make all the heartbreak worth it 06:00
Cycling: Rás Tailteann postponed to future date due to coronavirus 06:00
Whole new ball game: Sport will be last duck in the row in return to normal 06:00
Here is your handy guide to sport on television this week