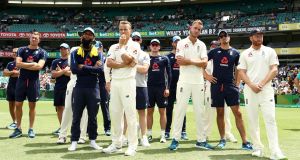 England look on during the presentation to Australia on day five of the fifth Test match in the 2017/18 Ashes series. Photograph: Ryan Pierse/Getty Images

It was all over by 2.15pm – though not quite in the manner anticipated – and the margin of victory reflected Australia’s dominance in the series. Steve Smith’s side won by a monumental innings and 123 runs.

To the disappointment of just about everyone at the SCG, Joe Root was unable to resume his innings at the start of play, which greatly reduced the possibility of a compelling rearguard action. Root had played superbly on Sunday evening and was unbeaten on 42.

But on Monday morning he was taken to hospital suffering from severe dehydration and diarrhoea. It was assumed that this was a consequence of his being in the field for almost all of Sunday when temperatures in the middle soared as high as 57 degrees, initially trying to marshal England’s flagging attack, then defiantly batting for some pride and the draw.

Later, it transpired that Root had a viral gastroenteritis bug and that his illness had noting to do with heat exhaustion, although the temperatures on Sunday could not helped his condition.

As a fragile Root was arriving at the ground, Moeen Ali joined Jonny Bairstow at the crease at 10.30am. For an hour they blunted the Australian attack. Moeen was, at least, clear-headed. He was in defensive mode even against his great tormentor Nathan Lyon. The pitch was offering some turn, as it should on the final day, but not much movement for Australia’s triumvirate of quick bowlers.

This pair battled away for an hour with Bairstow also in self-denial mode. There had been remarkably few alarms. But after drinks Moeen, inevitably, fell to Lyon in the most predictable manner. He pushed forward defensively; the ball did not turn much and it thudded into the middle of Moeen’s front pad, the classic modern dismissal of a left-hander by an off-spin bowler.

Moeen had a quick look at his partner but he knew that a review was pointless and he set off on his forlorn walk back to the pavilion, his last act on a tour where both his batting and bowling has been shredded by the Australians. This was the seventh time in ten innings that Moeen had been dismissed by Lyon in this series. The off-spinner has tormented all of England’s left-handers in this series with the possible exception of Jimmy Anderson. But no-one has been as tormented as Moeen.

He is a touch player rather than a technician, and when his confidence is low he has few buttresses left to lean on. The selectors are picking the squad for the two Tests in New Zealand starting at the end of March – with undue haste. We expect to know the squad by Tuesday night. Moeen may well be in it even though the case for him to be dropped for the first time in 49 Tests has never been stronger. A break now might, in fact, prolong his Test career.

Eyes swivelled to the pavilion as Moeen made his slow departure. The frail figure making his way to the middle was indeed Root, who would do his best to deliver his Eddie Paynter impersonations (in 1932 in Brisbane the indomitable Lancastrian came off his sickbed to hit a vital 83). He received a warm reception from the crowd plus his usual anthem from the Barmy Army to the tune of “Hey Jude”. Apart from when running between the wickets very gingerly Root did not appear to be too hindered. In fact he middled the ball as regularly as on Sunday night.

The two Yorkshiremen made their way sedately to the pavilion for lunch with England hanging on at 144-5 and two of their best players at the crease. But Root would never reappear. The symptoms returned, which meant that Root could not. No-one in the England camp could have battled harder than him throughout the series. But now his body had rebelled.

Root’s absence after the break hastened the end as did the bowling of Pat Cummins. Bairstow was soon lbw; Broad fended his second delivery, a bouncer, and the ball ballooned to the keeper; Mason Crane followed in similar fashion.

With this surge of wickets Cummins became the leading wicket-taker in the series – with 23 – and history was soon made. This was the first time in a five-match series when there have only been four wicket-takers in the side – even though Mitchell Starc missed the Melbourne Test.

As ever, Jimmy Anderson was there at the end. He was given out caught behind against Josh Hazlewood. He would have reviewed the decision by Umpire Dharmasena but England had no reviews left. The local TV coverage did not bother to investigate whether Anderson had hit the ball. In any case, by now only Anderson was in the slightest bit interested.

An exhausted Root, meanwhile, was fast asleep in the dressing room. Not quite the climax to the Ashes series that was planned back in England in September.