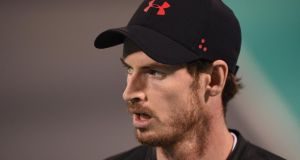 When Andy Murray hobbled away from Centre Court at Wimbledon six months ago, the suspicion that he might never hit a ball over the lush grass there again, the scene of his greatest triumphs and occasional disappointments, probably did not detain him long.

This was his spiritual and professional home. There surely would be other days and chances. He had not long turned 30, and he was No1 in the world. For all his gathering problems, he always “found a way”. Murray belonged in the surroundings, and felt more comfortable there than anywhere else.

When he was not competing for the All England Club’s revered singles championship, he sometimes returned out of season and sat alone in the echoing arena, thinking about life, tennis, the past and the future. It was the place where he had won two of his three grand slam titles, and the first of his two Olympic gold medals.

Those fans who had adored Tim Henman in his stuttering pomp took a while to accept Murray in their very English cathedral. But they came around. Enough of them eventually voted in their thousands to make him the country’s favourite sporting son on the BBC three times. He is also commemorated outside Centre Court, not far from the statue of Fred Perry.

Here, though, on day nine of the 2017 championships, Murray endured a loss in his adopted kingdom that ripped him to the core. He knew it was coming, too. His baggage since toppling the game’s most powerful player, Novak Djokovic, eight months earlier included shingles, flu, a muscle tear in an elbow and the unwelcome return of an old and mysterious injury. When Stan Wawrinka was beating him up in the semi-finals at Roland Garros a few weeks earlier, Murray felt a familiar pain sear through his right hip as the Swiss took the fifth set for the loss of just one game. Murray winced, but headed for the comforting grass of south-west London hoping his hip would calm down.

It did not go well. He lost early at Queen’s, another of his fiefdoms, and there was barely lukewarm conviction in his camp that he could survive seven matches in a row to hang on to his Wimbledon title. He fought through four of them, his limp growing more pronounced, his pronouncements more limp. Sam Querrey, solid but not in his class, won their fifth set for the loss of only one game. A pattern of collapse was emerging.

Against the advice of close associates, he thought he could get ready in time for the US Open in September. Two days before the tournament, he pulled out. The negativity was building.

Somehow an illusory glow of optimism attended his upbeat charity hit with Roger Federer in Glasgow in late November. The Swiss lent the occasion a regal patina, and Murray was happy in the unquestioning rapture of his compatriots. There was a chance he could rise again.

“My plan is to do a couple of weeks in Miami and then go to Australia very early,” he said. “Much earlier than I have done in the past.” And he would only return to active duty, he insisted, when he was “a hundred per cent fit”. It sounded convincing.

Murray went to Miami, but he did not go to Australia. Instead, introspection and doubt haunted him, and he came home. After Christmas with Kim and their two young daughters, he flew to Abu Dhabi at the last moment, intending to loosen his tightened sinews with some quality practice. Djokovic pulled out, Murray stepped in – and lost 6-2 to Roberto Bautista Agut.

Last Saturday he landed in Australia, intent on testing his self-belief and his body in a Tour match for the first time since losing to Querrey. Then, surely, he would know. But he sensed something was wrong. This was too soon still. On Tuesday, he told the tournament director, Cameron Pearson, he could not play. He would stay on until the weekend, see if his hip had “settled” and decide then about the Australian Open. This was beyond desperate.

Murray spent Wednesday by himself in his hotel room, mulling over the obvious. He woke up on Thursday morning, called for a courtesy car to Brisbane airport, flew to Melbourne and prepared to abandon his doomed comeback. The long flight home would give him time to think again, to decide if he should gamble on surgery to fix the hip. Half a year of solid rehab had done little more than help him go through the motions – but the movement was forced, the effort draining. The juices did not flow.

Murray withdrew, refusing interviews. Even his own management team had trouble contacting him. There must have been anger and frustration bubbling up for him to be so remote and secretive. What energy he had, he was directing towards one last throw of the dice, a final chance to get back to Wimbledon, where he might just locate the magic again. Murray’s bloodymindedness is one of his great assets on court. Now, though, he has to step back and ask himself: Is it still all worth it?