Time for a run? Ah, maybe not just yet

Your heart is pure and you’re fired with good intentions: this is going to be the year 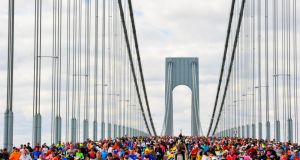 Runners cross the Verrazano-Narrows Bridge at the start of the New York City Marathon in Brooklyn. Photograph: Alex Goodlett/Getty Images

Ease yourself into it.

It’s only the first Saturday of the New Year. Your heart is pure and your intentions remain true and unsullied and this is going to be the year.

Okay, so you’re a little behind schedule. A week has passed since the New Year’s Eve bash when you were telling anyone who’d listen that this was it. Enough’s enough. A new leaf. You were going to “get back at it”. With a vengeance, now.

What “it” was you hadn’t full worked out. Maybe actually use that gym membership more than once a fortnight. Or get back to the indoor soccer on a Wednesday night. Those Broadman bikes in Halford’s looked nifty; you had visions of yourself astride one of those bad boys, knifing through tertiary roads and attacking the mountainous terrain, king of all you surveyed.

But then you thought about the crucifying indignity of cycling shorts and the weird shape of those helmets and the deathly paleness of those lone – and lonely – male cyclists of indeterminable age in their torso-hugging cycling jerseys that you’d encounter on all sorts of unforgiving roads, looking parched and fear-stricken as they faced into one of those bastard head-winds with a good 40 km to go until home.

Naw, maybe you’d leave the cycling for the golden years when your knees were crocked. For you are still in your prime and need something more dynamic and bracing, something to bring out the raging athlete, the beast within. After all, you still “want” to run a marathon. You’ve always said you’d “love” to run a marathon – maybe in New York.

Now, when you told people this, it wasn’t the actual running bit you were picturing – hauling ass across the Queensboro bridge on the verge of cardiac – as much as NY itself, the museums and the bars. The après run, you had to concede, was more of an attraction that the run.

And it was true that whenever you shared your noble ambition to join the legion of marathon runners (who secretly look down upon the section of mankind yet to complete their 26 miles with a stride falling somewhere between a fast walk and octogenarian run) they always came back with that practical and unanswerable: “well why don’t you then.”

As it if it is that simple. As if you can simply throw yourself into running 26 miles cold turkey. But over Christmas and New Year, you could feel yourself drawn to it; the idea of you as runner. You could almost hear the pounding of your shiny new trainers on muddy roads and your breathing hard and that feeling of satisfaction as you knock back the miles.

You’d probably be up to the half-marathon by Easter. It was a pleasing image, committing yourself to the great wilderness on those pre-dawn mornings with everything blue and frozen, hood up and head-phones on, like some of the GAA players in the cinematic television adverts celebrating the glories of the Spartan lifestyle. In truth you were looking forward to the challenge. You were looking forward to the pain. Mind you, this line of thinking occurred on St Stephen’s night and you’d been leathering the brandy.

Still and all, when January 1st came around, you were bristling with a sense of purpose as you went about getting ready for the first run of the year. First run of a few years, in fact.

And it wasn’t ideal that there was a pretty delicious aroma of bacon and syrup in the kitchen because the others were muzzy headed and feeling in the need of fat and coffee while you, you killer, waved away all offers of a cooked breakfast and began to conspicuously munch on a banana. Then you’d be off.

But you gave the outdoors a quick scan and you didn’t like the look of that sky one bit. Blackish and angry and filled with rain. Not that a drop of rain was going to put you off. At the same time, though, it would be nothing short of dumbness to come down with a bout of pneumonia that might set your ‘programme’ back by a couple of months.

Just the one bit of bacon, so, and whoa, easy on the syrup. You made a wise decision – don’t all the experts say rest days are more important than training days. You were getting the rest day in first. But there was absolutely zero chance of you going anywhere near a drink for a long time. No way. It would be a quiet January 1st.

Then the messages came in. On text and on Whatsapp. Ulster v Munster. Leinster v Connacht. A crew gathering before everyone headed off. When would you see them all again? Wasn’t this what ‘the festive season’ was all about? None of those bozos understood; they had no intention of running a marathon, anywhere, ever.

And when you headed out you believed you would be home again as soon as the second game was done. But it turned out to be a brilliant night. One of the best in years. So good, in fact, it was struck up again on the Tuesday and you were feeling a bit ropey on the Wednesday and Thursday. What you needed now was a few good early nights because everyone knows that if you train on a tired body you are doing more harm than good. You heard Sonia O’Sullivan saying that. Or was it LeBron?

So now it’s Saturday – 51 weeks to go in 2018. The weighing scales are up there in the bathroom, taunting you. And the weird thing is that ever since you began to think about running, you can feel a calf injury beginning to stir – an old injury, a legacy from the days when you were a flier.

Because make no mistake, you had pedigree once; you had minor trials or you could run the 100m in ten flat or you ran juvenile against Fionnuala McCormack or you once marked a Brogan or a McBrearty in a schools match and you gave them nothing. Not a sniff. Nobody remembers that. But you do. And you miss that.

You know you’ve no excuses that you want to hear anymore. You can’t believe it but the auld Gah is going to be kicking off in three weeks’ time. You know that the floodlights are general all over Ireland; that the 32 county teams are burning the lungs off themselves because this is the only time of year when the whole thing is genuinely democratic and they are all at the starting line.

Plus, you can’t ignore anymore that watching MOTD kind of gnaws at you now because you can’t remember the last time you kicked a ball for the pure fun of it and that there was a time in your life when you couldn’t imagine a day when you wouldn’t kick a ball.

You’re sort of tired of the fact that watching sport and following sport is keeping you away from living sport.

And that feeling is strong now: that impatience to break out of yourself. Who cares what Pep has to say? Let someone else worry about Jose’s rant. It’s decided; you have resolved, in fact, that you can’t waste another minute and are out the door as soon as you finish reading the few lines of this thing to see if this douche-bag column has anything of use to tell you . . . and, of course, it doesn’t so you’re already halfway there – on the road, in the pool, on the cross-trainer, on the bike. On the move.