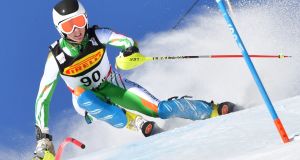 Rainy day resolution No 46: eat more, sleep less, and wake up to repetitiousness.

It’s the third day of the year. Cormac Comerford sits down in an old hotel in Killiney. He’s cycled up from his home in Glenageary in the freezing rain wearing an oversized ski jacket, bright green and orange. One of our Winter Olympic hopefuls.

He knows exactly how this sounds – how some might just as easily say Winter Olympic no-hopeful. They enter our world once every four years, if at all, at best a mild curiosity, at worst for some gentle ridicule – at least as much of a contradiction as a Jamaican bobsleigh team.

He knows the other perceptions too – not of athletes but of the jet set and gilded or well-heeled diaspora. It’s only been two decades since modern Ireland cast herself as a Winter Olympic nation, and since then our finest hour came with Clifton Hugh Lancelot de Verdon Wrottesley, 14th Baronet, 6th Baron Wrottesley, or simply Lord Clifton Wrottesley for short.

Fourth in the skeleton event in Salt Lake City in 2002, Lord Clifton Wrottesley combined himself as an Irish sportsman and a British peer and appeared at once everything our Winter Olympic hopefuls could aspire to be. Other such as downhill skier Patrick-Paul Schwarzacher-Joyce, born in London, to an Austrian father, carved out another path and twice made the Winter Olympics.

Only now – and especially after the serial-killing act the Russians performed last time out in Sochi – who even cares anymore? There are a lot of good reasons to write up strategic plans and build pathways to success but our Winter Olympic hopefuls don’t automatically count.

Cormac Comerford didn’t set out to change these perceptions because he only discovered them later on. Born and raised in Dublin, the highest peak near his home being Killiney Hill, none of his family are skiers, or indeed gilded. He was eight years old when an aunt first took him up the dry slopes at nearby Kilternan, and he hasn’t looked back since. He’s not certain whether he found skiing or skiing found him but either way it’s been a perfect fit.

He turned 21 in September and since then has been living and training as a slalom skier at the Kronplatz Racing Centre in the Italian Alps, full-time, while also continuing his engineering degree at Dublin Institute of Technology (DIT). Given the technical and physical demands of the slalom there’s no such thing as part-time training; yet somehow he managed that for a couple of years, surviving on a lonely wing and a happy prayer.

And then think slalom: dodging between 50-60 gates, 8-11 metres apart, flat-out downhill at 60kph for between 40 seconds to a minute. Even without Sam Fonteyn’s Pop Looks Bach playing as the backdrop it is spectacularly hard and the very essence of the adrenaline rush.

Last February, he finished 49th at the 2017 World Championships, staged on the hallowed slopes of St Moritz. A kid from Glenageary, who owned one pair of beat-up skis, top-50 in the world? Truth is he’d come index-finger-on-thumb close to quitting the year before and now wild horses couldn’t drag him away. Even with no prospect of fame and even less of fortune.

Here’s the deal: the 22nd of this month is the qualification cut-off for PyeongChang, where, somewhere in the South Korean Alps, the 2018 Winter Olympics get underway on February 9th.

Ireland currently has about nine Winter Olympic hopefuls, five of whom are poised to qualify. Comerford is still hopeful is the possible sense, although at this stage more improbable.

He spent Christmas with a friend in Zurich, came home for the New Year and to sit exams at DIT, and is back in Kronplatz next week, racing again in France, Croatia and Italy. The plan is to top-up his slalom ranking when in reality it will likely be too little, too late to make PyeongChang.

Others are more hopeful.

In another lifetime, Patrick McMillan might be lining out with the Leinster rugby team this weekend, having played to U-19 level, alongside the likes of Tadhg Furlong and Jack Conan.

Instead he’s completing preparations for the downhill at PyeongChang, having already secured the A-standard. French-based Tess Arbez is set to secure Ireland’s second Alpine slot, in the slalom and giant slalom.

Snowboarder Séamus O’Connor, freestyle skier Brendan Newby, and cross country skier Thomas Westgård are also likely PyeongChang-bound, but all of them have grown up around peaks far bigger than Killiney Hill and where it snows a lot more than once in every 10 years.

Still everything about Comerford’s journey, he tells me, has been worthwhile, the final destination still a long way off  – 2022, at the earliest. He considers himself blessed and privileged almost to the point of guilt, even if that’s often meant sleeping in train stations and bluffing his way into races.

“I do feel incredibly lucky,” he says. “I found something I’m passionate about, and learnt so many life lessons along the way that it’s already gone beyond the sport. It’s nice being home again, but I feel as well it’s a bit of a bubble here, and instead of just sitting through college, it’s been a great challenge, going out there and trying to push myself as far as I can.”

Other perceptions are changing too: the Olympic Council of Ireland (OCI), he says, are wholly supportive, as is the Snowsports Association of Ireland, plus DIT, who are giving him a sports scholarship on a par with GAA players.

And with that he cycles back towards Glenageary in the freezing rain, a gentle reminder that for all the cheap thrills at our fingertips these days, most of us lead pretty repetitious lives.