‘We’ve not been blown away every game, doesn’t feel like completely disastrous series’ 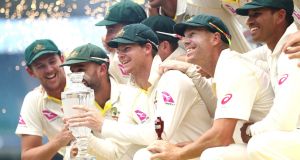 Jimmy Anderson, deputising for a stricken Joe Root, insisted the Ashes hammering suffered by England in Australia should not result in a major overhaul of the coaching staff but rather individuals within the team must learn to cope better with the pressure of Test cricket.

The 4-0 scoreline was wrapped up at 2.15pm on the fifth day in Sydney when Anderson was the last man out to Pat Cummins for an innings and 123-run defeat, with Root, asleep in the dressing room because of viral gastroenteritis, unable to resume his innings of 58 not out.

The England captain, who had spent the morning in hospital with severe dehydration, vomiting and diarrhoea following the extreme heat on day four, batted for an hour before lunch but then failed to emerge in the afternoon, even when Steve Smith was lifting the Ashes urn amid the wild post-match celebrations for the home side.

That left Anderson, the vice-captain, to face the music for the team and offer a defence of the set-up under Trevor Bayliss, the head coach, whose Test record sits at 18 defeats to 14 wins with successive 4-0 away defeats following the failed India campaign last winter. The whitewash four years ago prompted regime change but the leading wicket-taker sees it differently this time.

“It doesn’t feel like a series where there should be a big upheaval,” said Anderson, who had personally shone in leading an otherwise mis-firing bowling attack over the course of the five Tests, with the 35-year-old claiming 17 wickets in unhelpful conditions.

“We’ve not been blown away in every game, and it doesn’t feel like a completely disastrous series. We’re hurting and we know that we’ve got to improve in many areas. We’ve not dealt with those pressure situations well with bat or ball. That’s been the difference in this series. I don’t think the planning could have been better. It’s just the way we’ve performed on the field.”

Tom Harrison, the ECB chief executive, has already stated there will be no knee-jerk reaction and it is clear that the one-day side’s dramatic improvement i is in the favour of Bayliss as England look to win the World Cup on home soil in 2019. The selection panel, led by James Whitaker, may well be one department under scrutiny though.

Certainly, the numbers do not stack up favourably for England on this tour and the assertion by Anderson that it had felt closer than 4-0. Root’s batsmen averaging 29 runs per wicket, compared to 51 by Australia, and his bowlers picking up only 58 wickets – some 19 fewer than during the 5-0 defeat in 2013-14 – while failing to claim 20 in a Test match.

Anderson cited his desire to still be playing Test cricket when Smith’s side look to defend the urn in England next year and will doubtless be included when the squad for the tour of New Zealand in March is named, though others will be more nervous. James Vince and Mark Stoneman averaged in the mid-20s, while Moeen Ali’s all-round game fell apart and Stuart Broad’s 11 wickets across the series raised questions about his longevity.

“All the guys in the dressing room are hurting as much as I am,” said Anderson. “That feeling you get should make you want to win the Ashes back in 2019. I’m going to do everything I can to be available for that series.

I don’t pick the team, I can’t say I’m definitely going to be there. But I’m still as hungry as ever. I’d really like to be around in 2019.”

England doubtless suffered from the loss of Ben Stokes. But though the tour was dogged by some trivial off-field distractions that were amplified by the shadow of the all-rounder’s suspension, Anderson pushed back at the suggestion it affected their cricket.

He said: “It’s no secret that he’s one of the best all-rounders in the world and on his day as good as anyone with bat and ball. Obviously we miss a player like that. I hope he’s back very soon. But from our point of view, it’s not affected the way we’ve gone about our business. The off-field stuff has had no impact whatsoever. Once we get to the ground, that’s what we’re focused on.”

1 Man City to investigate Kyle Walker over lockdown sex party
2 Ken Early: Mick McCarthy II was no blockbuster, more of a flop
3 Club World Cup to be proposed as alternative to Champions Cup
4 The Offload: Roll up for rugby’s very own horror film
5 Cheltenham controversy will pass for magnificent triviality of horse racing
Real news has value SUBSCRIBE