Andy Murray plans to return for Wimbledon after hip surgery 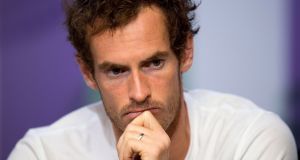 Andy Murray revealed on Monday that he has had hip surgery in Australia which he hopes will not only allow him to play at Wimbledon this summer, the scene of his last competitive match, but also restore him to near the highpoint of his career in late 2016, when he began a run of 42 weeks as world No1.

Speaking from his hospital bed only hours after Dr John O’Donnell, one of the world’s leading hip surgeons, had operated on him, Murray said: “I went in at 7.30am [Melbourne time] and I woke up from the operation about 10.30am. I’m very optimistic because, having spoken to the surgeon, he was very happy about how it went. He felt that my hip will be feeling better than it did a year ago. I was still doing fine a year ago, ranked No1 in the world.”

Murray - who had given the impression last Thursday that he was flying home to London after pulling out of the Brisbane International, when he was actually making probably the biggest decision of his career 12,000 miles away - will return to the UK within a fortnight, when he says he should be fit enough to fly. He did not think he would attend the Australian Open, which starts next Monday and revealed he hopes to begin his rehab in a little over three months.

Speaking exclusively to British tennis writers, he said: “In terms of my approach to my career, I’m certainly not going to be putting in the same amount of tournaments and effort to try to get to No1. I’ll certainly be more considered in the amount of tournaments I play, even though I play a conservative schedule anyway in comparison to most of the players on the Tour. I’ll be playing a reduced schedule, and then focusing more on trying to win major events and big tournaments rather than trying to achieve certain ranking goals.”

He added: “My plan is to be back playing around the grasscourt season - potentially before then. I’m going to take my time to make sure that the rehab is done properly, and make sure that the surgery is as successful as it can be. I’ve been quoted times for how long it’s taken for players to get back from the surgery I’ve had, and up to 14 weeks is what I’ve been given.

“I want to come back when I’m fit and ready to play, not to get into a situation like in Brisbane [where he withdrew without going on court] or New York [where he pulled out just after the US Open draw was made, where I’m unsure when I turn up at a tournament how fit I am. I want to know when I come back that I’m ready.”

Murray sounded reassuringly upbeat about his chances of resurrecting a career that had looked in danger of disintegration only a week ago - six months after his last competitive match, when he lost to Sam Querrey in the quarter-finals at Wimbledon.

He also revealed he began consulting Dr O’Donnell in 2008 because of minor hip problems. Murray said the decision to have surgery - having earlier rejected it - was not one he took lightly. “I was nervous this morning, but it was the right decision to make. I was struggling. I’ve been in pain walking since before Wimbledon. It’s got better but still it’s extremely tiring mentally when every single time you are walking you are feeling your hip, from the first minute that you wake up in the day and start walking to when you lie down at night.

“This is something I’m going to have to manage very smartly and very closely for the rest of my career. I’m aware of that and I’m going to make sure I’m going to do that. I’m just looking forward to not being in pain.”