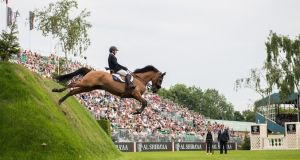 Kildare’s Mikey Pender made history on Sunday when becoming the youngest rider to win the famous Hickstead Derby.

Making his debut in the four-star class, Pender (19) was one of three riders who went clear in the first round which was the first time this has happened since 1993. Irish’s Shane Breen, who is based at the Sussex showgrounds, had been the first to do on Derby newcomer Golden Hawk, followed by Pender on the Puissance specialist Hearton du Bois Halleux and finally Britain’s Harriet Nuttall on her Irish Sport Horse gelding A Touch Imperious.

First to go in the jump-off, Breen recorded the fastest time (80.45) but ended up on eight faults when Golden Hawk lowered the Derby rails and the first element of the double of gates. Pender then went clear in 101.77 on Paul van den Bosch’s Herton du Bois Halleux to put the pressure on Nuttall who had finished in the top three each year since 2014. When A Touch Imperious hit the tape at the water for four faults, the British rider had to settle for second place for the fourth time.

Pender thus became the youngest rider to win the class as both Marion Mould (1967) and Michael Whitaker (1980) were 20 years of age when they did so and he was also the first rider to win on his debut since Michael Whitaker in 1980. He picked up the £34,650 first prize as well as taking home the Al Shira’aa Trophy and having his name added to the Boomerang Trophy which honours Eddie Macken’s four-time winner of the Derby (1976-1979).

“It hasn’t really hit me yet, but it’s what every rider dreams of that comes here,” said Pender. “He’s done a lot of Puissances, but this is the first time I’ve done something like this with him. It means so much to win this - there’s so much history to the class, and so many good riders, and I’m just speechless. Getting up this morning, you don’t think it’s ever going to happen. I knew the horse wasn’t going to be very fast in the jump-off, so I knew I needed to try to go clear and put the pressure on Harriet. That’s what I did, and it paid off.”

Nuttall was frustrated to come so close and miss adding this victory to that in Saturday’s Speed Derby with another ISH gelding, Silver Lift. “A Touch Imperious has felt on really good form here, and he jumped a fantastic clear - probably his best round here,” she said. “If all is well, we’ll be back next year - with the way he’s jumping, why would you not? It’s a privilege to come to this show, and to have horses like Silver Lift and A Touch Imperious to do these classes.”

Breen, who won Friday’s Derby qualifier on Golden Hawk, gave credit to his fellow competitors. “I feel sorry for Harriet, she’s been fantastic for so many years, but I’m delighted for Mikey.”

Last year’s winner, Britain’s Will Funnell, had one fence down in round one with Billy Buckingham (171.87 seconds) to finish fourth equal with Graham Gillespie and Andretti H (175.81). Seven riders shared sixth place on eight faults including Co Meath’s Elizabeth Power with her own Doonaveeragh O One (162.28), Co Sligo’s Richard Howley riding Chinook (169.42), Kilkenny’s Ger O’Neill on Uncas S (170.82), Breen with his second ride Can Ya Makan (172.55) and Howley again on Notis Me (176.27).

On Saturday, at Estoril in Portugal, 24-year-old Galway rider Michael Duffy recorded his first podium finish in a Longines Global Champions Tour Grand Prix when finishing third on the ISH stallion, Mullaghdrin Touch The Stars which is owned by his usual rider, Britain’s Jessie Drea, and Lynne Humphries.

Eleven of the 34 starters progressed to the second round of the 1.60m competition where six riders posted clear rounds in their bid to win the €300,000 class. The fastest of these came from Switzerland’s Martin Fuchs on Chaplin (37.64) with Britain’s Ben Maher finishing second on Explosion W (38.09). Duffy recorded his second clear in 38.58 to place third, just ahead of Co Offaly’s Darragh Kenny riding Important de Muze (39.56).

“It is great to be on the podium,” commented Duffy. “Mullaghdrin Touch The Stars is a very talented horse and has a great heart. I have only had him for four shows so I have a good feeling about him. We will be working hard to try go two better in Chantilly. Ben was just before me I knew he was going to be quick, all you can do is do your best. Hopefully next time it will be enough.”