Ireland coach Cox unhappy with side after final defeat to France 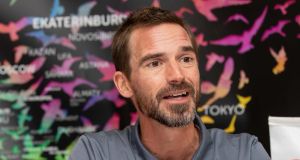 Ireland coach Alexander Cox said his side’s final performance at the FIH Series final in Le Touquet left him “pissed off” as they could not build on an otherwise fruitful week.

Ireland secured their place in October’s Olympic qualifiers with a brilliant 4-2 Saturday win over Korea, but could not back it up on Sunday evening as they crashed to a 3-1 defeat to hosts France.

“The main goal was to qualify for the qualifier and that’s what we achieved with a strong performance against Korea. That’s the positive,” the coach said.

“Today we underperformed. We put in effort of course but just putting in effort is different from trying to play the best game that you can. We made so many mistakes on the ball; we tried to work off the ball but if you make so many mistakes then you can’t win a game.”

He saw his side fall behind against the world number 15 side in the 10th minute when Viktor Lockwood’s left-wing machinations unlocked the door for Blaise Rogeau to roof a shot from mid-circle.

It gave the hosts plenty to cheer, and they upped the ante in an already sweltering 28 degree heat, with humidity to match.

Ireland did respond well with Seán Murray scoring an equaliser in the 15th minute from Ben Walker’s pass. The former Lisnagarvey man had already fired a shot at Arthur Thieffry’s helmet and cracked the post in a lively volley of attacks.

However, the French began to take control as time wore on, and went in front via defensive giant Victor Charlet, who whipped home their third penalty corner.

Charlet’s second, five minutes into the second half, stretched the lead to 3-1, and Ireland never truly threatened to make any inroads from there in an error-strewn performance.

Paul Gleghorne brilliantly saved off the line, while Rogeau inexplicably missed an open goal to limit the damage.

As such Ireland are now assured of a Tokyo showdown but are in limbo about who or where that tie will be. The European Championships in August will be the next chance to improve that outlook, but Cox was frustrated his side did not turn up in this tie which could have also aided their chances.

“Of course it will look better in a week’s time because we have qualified but the last game that you play is always the one you remember. The last game here doesn’t make us happy.”

Ireland now take a two-week break to recharge the batteries before linking back up again with camps in July and a tournament in Spain, before fine-tuning for the Euros in August in Antwerp where a top four finish will be the target.