Ireland qualify for quarter-finals of DNA competition in Minsk 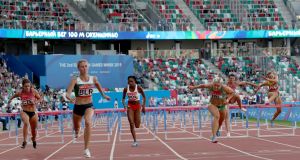 Sarah Lavin of Ireland during the Women’s 100m hurdles at Dinamo Stadium at the Minsk 2019 European Games in Belarus. Photograph: EPA

At times slightly confusing, though it seems no less entertaining, Team Ireland have qualified for the quarter-finals of the Dynamic New Athletics (DNA) competition at the European Games in Minsk, Belarus.

With 24 countries of mixed-gender line-ups, facing each other in six-way knockout matches over four rounds, Ireland ended up fifth best in their match, behind the Czech Republic, Belarus, Lithuania, and Latvia.

Each match is composed of nine events: the men’s 100m, women’s long jump, women’s javelin, women’s 100m, mixed 4x400m relay, men’s 110m hurdles, men’s high jump, women’s 100m hurdles and the hunt (mixed medley relay). Within each match, the winner scores 12 points for the win, 10 points for second, eight points for third, and so on. The 4x400m Mixed Relay of Brandon Arrey, Sinead Denny, Catherine McManus and Andrew Mellon finished fourth in 3:24.37, a season best for Niamh Whelan of 11.79 in the 100m also earning her six points in fourth. Team Ireland will now contest a quarter-final match on Tuesday.

Back at home and Fionnuala McCormack made a prompt return to top form after finishing 11th in the Boston Marathon in April, setting a new course record at the Dunshaughlin 10k when coming home 32:18. The men’s race was a tight finish between Mick Clohisey (Raheny Shamrock) and Hiko Tonosa (Dundrum South Dublin), with Tonosa just getting head in the final strides to take the win in 29:30, one second clear of Clohisey.

It continues the excellent run of form for Tonosa, who last April became the first asylum seeker to win an Irish title, claiming the 10km road race title; he has recently been granted refugee status.

Roscommon to fulfil Cavan fixture despite Covid-19 case 09:03
Tiger Roll to return on the flat at Navan on Thursday 08:22
Exeter’s Rob Baxter: Covid-19 poses threat to rugby’s viability 08:18
Waterford pull out of Antrim clash due to Covid-19 concerns 09:29
Golf courses to close under Level 5; Andy Farrell names team for Italy clash 07:52
Here is your handy guide to sport on television this week