In the women’s cup two big preliminary games are in store as Glanmire host Liffey Celtics, while Mercy welcome Maree to Dublin 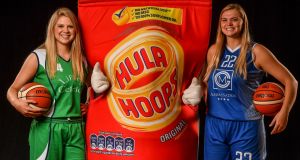 This Bank Holiday weekend is a massive one in the Irish basketball calendar as the opening rounds of the Hula Hoops National Cup tip off across all four divisions.

The battle in Cork on Saturday evening will certainly be one to watch. Looking at their league performances to date, Liffey boast the better start to the season, with three out of four wins, while Glanmire have just one win from three games.

Yet despite the better record Liffey will not be taking anything for granted in a Glanmire side that boasts big-game experience including stalwart point guard Aine McKenna, Casey Grace, Annalise Murphy and Louise Scannell.

Looking ahead, Glanmire boss Mark Scannell said: “It’s been a tough start to the season so far as we’ve been trying to gel as a group and get our Americans up to speed. It’s a tough ask now to go in this weekend against the cup holders, especially this early in the season, but hopefully we can plan and prepare well this week and give ourselves every chance at the Mardyke this weekend.”

Liffey have a good mix of experienced and new talent. Sorcha Tiernan and Aine O’Connor lead the Irish charge, while Americans Darby Maggard and Kylee Smith are proving themselves to be forces to be reckoned with.

“We are very excited about the cup this weekend against a talented Glanmire team,” said new head coach, Laura Mullally. “While our team comes in as reigning champions, the players and coaches know that each season brings new challenges.

“We like the timing of this first game though – we’re four games into the season and we feel good about the progress we have made as a team. I know it will be a great battle from two really good basketball teams.”

The second preliminary round game is just as interesting as DCU Mercy host newcomers Maree at DCU on Saturday evening.

Mercy currently sit top of the Women’s Super League table having won all of their games to date, and their unbeaten status is certainly one they’ll be hoping to maintain this coming weekend.

They boast an enviable strength and depth of talent throughout their roster, including a “who’s who” of Irish international stars and this, coupled with the additions of two strong Americans in Meredith Burkhall and Ashley Russell, will see Mark Ingle’s charges hoping to record a vital win.

Yet Maree are certainly no strangers to winning. They arrived into the Super League this year off the back of an unbeaten season in the Women’s Division One. Now in their maiden Super League season, they have lost just one game from four, and boast the talent of Claire Rockall, Fiona Scally and American Carly McLendon.

Meanwhile over in the Men’s Pat Duffy National Cup there are a number of big derbies in store. Killorglin welcome near neighbours Tralee Warriors on Friday night. Tralee come into the game with a stronger league record to date, with three wins from five games. Killorglin have one win from five, but will be hoping to deliver a big result at home.

Elsewhere, two big Dublin derbies are in store as Templeogue welcome last year’s Cup finalists, UCD Marian, in a hugely-anticipated clash. Marian have been in two cup finals in the past two seasons, losing to Templeogue and Killester respectively, and will be hoping that this year will be the year that they finally get to bring the cup home after a nine-year hiatus.

Templeogue, meanwhile, were cup champions in 2018, but were knocked out in the opening round last year by Tralee. They will be hoping that does not happen them again this weekend.

DCU Saints welcome Abbey Seals Dublin Lions in a big clash at St Vincent’s on Saturday evening. Saints had the better of this fixture by six points when the sides met in the early stages of the league, but with Lions beginning to find their rhythm they’ll be aiming to bag their first win of the season this weekend.

Last year’s cup semi-finalists, Belfast Star travel to Galway to face Maree. Star will be hoping to go one step further than last year, but were dealt a blow earlier this week when American Delaney Blaylock was ruled out for the coming weeks due to injury.

They will look to the firepower of CJ Fulton and the inside presence of Keelan Cairns to get them through this weekend’s games, but face a tricky challenge in a Maree side who could prove to be very hard to beat at home, particularly as Darin Johnson continues to settle into the league.

As it’s a Bank Holiday weekend a round of Men’s Super League games will also be played across Sunday and Monday.

Meanwhile in the men’s Presidents Cup reigning back-to-back champions Ballincollig will be hoping to challenge for a third cup title in a row this season. They face a very tough test against old rivals St Paul’s Killarney.

There will also be a round of league games on Sunday.