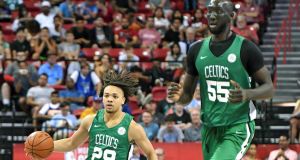 Tacko Fall, who became the NBA’s tallest player when he signed with the Boston Celtics as an undrafted free agent in July, was forced to enter the league’s concussion protocol after hitting his head on a “low ceiling”, according to Masslive.

The 226cm (7ft 5in) centre from Senegal said he suffered the bump when he was trying to wash his hands after a workout last Friday at the team’s practice facility but didn’t think anything of it, participating in a team charity event and an individual workout afterward with no noticeable effects.

But Fall said he felt unwell the next morning and entered the league’s protocol for head injuries.

The 24-year-old rookie, who is expected to spend most of the season with the G League’s Maine Red Claws, travelled to Philadelphia for Wednesday’s season opener against the 76ers but did not line out.

Celtics coach Brad Stevens said on Wednesday that he expected Fall to be cleared for a return soon.

“Very close [to a return] from what I’ve been told,” Stevens told reporters ahead of Boston’s 107-93 loss to Philadelphia. “But he wasn’t going to be active anyway.”

Only four players in NBA history have been listed as taller than Fall: Gheorghe Muresan and Manute Bol (231cm, 7ft 7in) and Shawn Bradley and Yao Ming (at 229cm, 7ft 6in). – Guardian