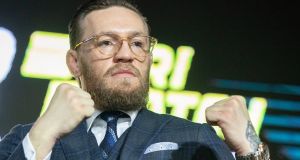 Conor McGregor: outlined his plan for his comeback following his January date in Las Vegas – with a third fight against Nate Diaz and an eventual rematch with Nurmagomedov his main aim. Photograph: Pavel Golovkin/AP

Conor McGregor has announced he will return to the UFC’s octagon on January 18th in Las Vegas.

The Irishman has not fought in mixed martial arts company since losing to unbeaten Russian Khabib Nurmagomedov in October 2018.

But on Thursday McGregor stated his intention is to return to action and, eventually, secure a rematch with Nurmagomedov.

During a lengthy press conference in Moscow, McGregor hinted he was ready for a rematch but said he was “not waiting around for that man”.

He then said: “I would like to announce to the public, the return of the ‘Notorious’ Conor McGregor will take place on January 18th in the T Mobile Arena in Las Vegas, Nevada. So that is my comeback fight.

“It is 12 weeks this Saturday, I’m in prime physical condition. Ask the UFC who my opponent is because I do not give a f*** who the opponent is.”

McGregor has a 21-4 record in the UFC and in 2016 became the first fighter to hold belts in two of the company’s weight categories at the same time.

He has fought just once in the octagon since then – the Nurmagomedov fight – but lost to Floyd Mayweather in a professional boxing bout in August 2017.

With his focus firmly back on MMA, McGregor outlined his plan for his comeback following his January date in Las Vegas – with a third fight against Nate Diaz and an eventual rematch with Nurmagomedov his main aims.

He added: “That will be the beginning of my season. I will then look to compete against the winner of Nate Diaz-Jorge Masvidal.

“Obviously I have history with Nate Diaz, we are set to make the trilogy bout. We will see how it goes. I feel Nate will get the better of that one. Then I will seek the Moscow bout and it will be against the winner of Tony Ferguson and Khabib Nurmagomedov.

France’s Teddy Thomas ruled out of Ireland clash 10:38
LA Rams see off Chicago Bears in a battle of the defences 08:45
Gerry Thornley on size of Ireland’s Parisian task; Son the star for Spurs again 07:48
Eddie Jones says he can’t guarantee England players will follow Covid-19 rules 06:55
Drogheda in the driving seat as First Division reaches a thrilling finale 09:06
Here is your handy guide to sport on television this week