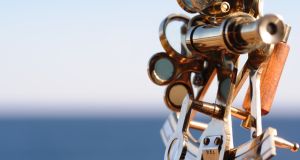 “We’re back to compass and sextant, and we don’t have electric auto-pilots either so the boat steers by the wind”

When sailor Gregor McGuckin slips away from the pontoon at Dún Laoghaire this weekend, his passage to Falmouth, England, will appear as unremarkable as many other yachts making similar journeys this season.

His boat would be quite anonymous at any mooring or marina berth apart from a bright orange dodger around the main hatch which would need closer inspection to reveal a watertight bulkhead.

Below decks his 34-year-old craft’s interior befits its age, but again there is little evidence of the modern such as digital instruments and electronic navigation aids.

Somewhere there is a modern single-side band HF radio that would have been the norm in transoceanic races until the advent of the all-carbon racing machines of the past two decades.

His 36-footer – named Hanley Energy after his recently secured title-sponsor – is heading south on the 50th anniversary of the original Golden Globe race ahead of his ambition to become the first Irish person to race solo and non-stop around the world.

Two days after the Volvo Ocean Race concludes in The Netherlands, the 31-year outdoor adventure centre instructor will begin his nine-month odyssey on July 2nd from Les Sables d’Olonnes in southwest France.

Sailing non-stop and unassisted on the original route around the great Capes, this replica event limits the 18 sailors from 13 countries to 1960s technologies with few exceptions.

Their boats will be equipped with modern tracking devices such as radar reflectors and automatic identification systems so that nearby vessels will “see” them. McGuckin’s position will also be updated on the web on a regular basis so that family and race-followers can see his progress.

But all this will be invisible to the individual sailors that will be essentially racing in their own little bubbles, visible to others but apart from visual sight invisible to one another.

“It’s a safety thing – there’s so much more traffic out on the seas now so it’s part of collision avoidance,” he said. “Everyone else in the world will know where I am except me!”

Other minor concessions to modernity also include modern protective clothing, and McGuckin has a full set of Helly Hansens plus thermal layers. Freeze-dried food is on the menu, but alongside plenty of tinned, boil-in-the-bag and long-life options.

“There are still a few bits to be done, but mostly cosmetic things,” McGuckin told The Irish Times as his shore-team worked on preparing the boat for the crewed delivery trip.

“We’re not allowed modern materials for the boat such as carbon, Kevlar or dyneema, and we’re back to compass and sextant. And we don’t have electric auto-pilots either so the boat steers by the wind.

“If I’m having some kip and the wind changes then the boat changes course so to make it as simple as possible we’ve placed compasses throughout the boat so where ever I am I can glance and see what direction we’re going.”

Loading supplies and spare parts takes place on Friday, and next week a charity race takes place heading to France.