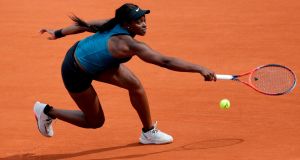 It is testimony to the depth of their friendship that Sloane Stephens’s perfectly shaped backhand down the line to put Madison Keys out her misery and out of their French Open semi-final on Thursday was struck almost apologetically.

When it landed like a merciful knife into the deuce corner to end their one-sided match in just an hour and 17 minutes, the winner raised her arms in celebration, smiled broadly then looked immediately up the court on a packed Philippe-Chatrier to commiserate with her fellow American.

She played an almost perfect defensive game, soaking up seven aces and keeping her mistakes to a minimum, to win 6-4, 6-4 and book a place in the final on Saturday against the world No 1, Simona Halep, who earlier took an hour and a half to break down the resistance of Garbiñe Muguruza, 6-1, 6-4.

In the second semi-final a plainly nervous Keys hit 41 unforced errors, 22 of them on her forehand, as she strove to get into the contest. They have been here before. In the US Open final last year – a first for both of them – Stephens won in 61 minutes, forcing 30 unforced errors from Keys, keeping her own down to six.

“It’s always hard playing someone from your country and such a good friend,” Stephens said. “I was just pleased to get through that today and play some good tennis.”

Key to her improvement after a long stretch out injured before her comeback last year has been Stephens’s noticeably calmer demeanour. She looks content, on and off the court, and her game has benefited from it.

Halep will be an altogether different proposition. She is 5-0 up in their careers and Stephens has not beaten her since winning on the hard courts of the Australian Open in 2012. In Paris, however, the Romanian’s clay smarts make a considerable difference; she beat Stephens 6-4, 6-3 in the quarter-finals four years ago.

While Stephens has had an easier tournament Halep will probably start favourite. She is 15-3 on clay this season and, although her serve faltered a little on Thursday, she had plenty left against Muguruza.

“I was at a very good level the whole match,” she said. “Even though the first set was 6-1, she didn’t give up a point. I’m really happy that I could beat a player like Muguruza. She’s a great opponent, a great player. It’s always tough against her. It’s maybe the second favourite win of my career, after [Maria]Sharapova.”

It is a compliment to the Russian as any win against Sharapova, even at this stage of her career, takes the sort of perseverance that can lead on to more success in that tournament.

Halep’s one problem here had been starting strongly. She dropped her first set of the tournament to Alison Riske, struggled at the beginning of her third-round match against Andrea Petkovic before bagelling her in the second set, and went down in a first-set tie-break in the quarters against Angelique Kerber. Not this time.

“Sometimes it’s working well, sometimes not,” she said. “But, if you finish the match in a good way, doesn’t matter that much. Today I just felt good on court. I felt positive and I started to play very well from the beginning.”

This is her fourth final in a grand slam tournament – although she is yet to break through – and Stephens’s second. But Halep says she will do nothing different.

“I don’t know what I would change – probably nothing,” she said. “I will keep my routine.

“I have more experience now. I feel calm. And I have two more days until we play. I will stay chilled, I will relax. And then we will see what is going to happen on Saturday. But, for sure, I will fight for every ball.” – Guardian service