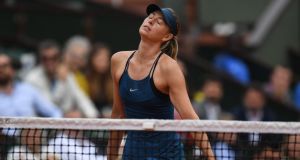 Three grand slam champions adorn the women’s semi-finals at Roland Garros – as well as the best player in the world, Simona Halep. The Romanian is playing well enough but, like Caroline Wozniacki did before her, she has to shake free the baggage of having no major on her CV while owning the No 1 ranking.

On Thursday she plays the first semi-final against the only player to beat both Williams sisters in slam finals, Garbiñe Muguruza, the 2016 French champion and defending queen of Wimbledon who on Wednesday made short work of Maria Sharapova, shortly before Halep had a tougher time accounting for Angelique Kerber.

The winner is guaranteed to play an American in the final, as Madison Keys and Sloane Stephens meet in the other semi-final, a rematch of their 2017 US Open final.

“What a draw,” Muguruza said, and, with a nod towards Halep’s trophy-free status, “I think she’s right now probably the best player. Well, she’s No 1.”

The Spaniard with the sharp shots and observations said of her easy win over Sharapova, “When you win against an old-time player with a lot of experience, it gives you a lot of [confidence]. These matches are the way you need to travel to get to the end of the tournament.” Thanks for coming, Stepping Stone Maria.

Muguruza, who normally gives little away during a tournament, did welcome the opportunity to get to grips with Halep as soon as possible, perhaps hoping to trade on her relative freshness. “I’m excited to play a good semi-final, and it’s good that it’s tomorrow [Thursday], yeah.”

Earlier on Court Philippe-Chatrier, as forehands and backhands billowed the net or sailed beyond the lines, as her second serve fell to pieces and the court dwindled to the size of a matchbox, Sharapova had to content herself with winning the screaming contest.

But there are no points on offer for aural irritation and the cheers that greeted Muguruza’s 6-2, 6-1 win after 70 minutes of an embarrassingly one-sided quarter-final were surely mingled with gratitude for an early conclusion. There was not a lot else to celebrate, apart from Muguruza’s clinical excellence.

They shared, evenly, 20 winners but Sharapova’s 27 unforced errors, 12 more than the Spaniard, undermined her ambition, which remains considerable. Her run here at least has been enough to move her further away from the danger zone of the top 32 seeds going into Wimbledon; she moves from 30 to 25 now.

How she would burn if she had been in danger of losing a place in the protected group of seeds there next month because of a complimentary seeding for Serena Williams. And she has the American to thank for a walkover to the final eight here.

It’s tantalising to wonder if a fit Williams could have given Muguruza any better of a fight than the Russian did. Muguruza – who beat Williams in the final here two years ago – was so in control of this match that, when Sharapova stepped up to serve for survival, she edged at least a yard inside the baseline to rifle a backhand return that reduced her opponent’s racket to the substance of blancmange.

Not since Victoria Azarenka towelled her 6-3, 6-0 in the 2012 Australian Open final has Sharapova suffered so heavily – in numbers, at least – in a major.

They exchanged cursory pleasantries at the net, Sharapova disappeared with a tempered version of her regal wave, and Muguruza moved on to a tougher assignment in the semi-finals against Halep.

On Wednesday the Romanian overcame a wearing first set to beat Kerber, one of the best last-ball fighters in the sport, 6-7 (2), 6-3, 6-2 in two and a quarter hours on Court Suzanne-Lenglen.

The first set was tight and full of mistakes, Kerber overcoming 21 unforced errors, winning most of the short rallies and grinding it out in the tie-break.

Halep pulled off one of the great rescues of the tournament in the ninth game of the second set, hunting down a drop shot and dumbfounding Kerber with an acutely angled reply that skimmed the net on her way to an edgy break – courtesy of a double-fault by the German – that levelled the match at one set apiece.

After two and a quarter hours, Kerber, 2-5 down and suffering under the draining weight of Halep’s counter-attack, was serving to keep the match alive. She could not manage it, hitting long from deep, and the little No 1 with the complex personality, often at war with herself as much as her opponents, was through to the semi-finals. – Guardian service

1 IRFU in line for €75m windfall as CVC acquire 14.5% Six Nations stake
2 Monica Seles: The warrior queen who could have been the best ever
3 Bryson DeChambeau motors home with 65 to win in Detroit
4 Enable can’t reel in impressive Ghaiyyath at Sandown
5 Six Nations planning second tournament in 2020 – reports
Real news has value SUBSCRIBE