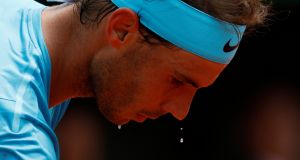 Rafael Nadal has been just a little impatient the past couple of weeks, as if rushing towards history and not wanting any distractions, and his steps quickened in keeping with his temper here on Thursday as he repaired his aura to reach the semi-finals of the French Open for the 11th time.

Resuming against the dogged terrier from Buenos Aires, Diego Schwartzman, and trailing a set and up 5-3, 30-15, with the ball in hand, he levelled without fuss, but the rest of the job was a little tougher than might be gathered from first expectations. He had to battle hard to grind it out for a 4-6, 6-3, 6-2, 6-2 win.

Nadal broke the Argentinian at the start of the third and went on a tear, winning 12 of the first 13 points. It took Schwartzman 10 minutes to land a blow.

The rain that scuppered Schwartzman’s charge the night before had migrated and what had been a fierce contest was turning into a familiar pre-coronation warm-up for the man who could rightly claim squatting rights on the tournament’s main court.

Court Philippe-Chatrier will be knocked over and put together again once the titles are decided on Sunday, sporting an umbrella-like hat by 2020 (perhaps), focal point of a major rebuild of the oblong-shaped site that nudges up against the most beautiful botanical gardens. Pity the internal squabbles have delayed the project by at least four years.

Anyway, Nadal could win the French Open were it staged on a beach. His command of the dust at 32 is complete. His only vulnerability is a marginal dip in sharpness, but he’s still quick – and the iron left wrist – wrapped up these days, supposedly as a guard against sweat – still rolls through the top-spun forehand like Anthony Joshua turning over on his left hook.

There is a lot of the boxer about Nadal. His footwork is urgent and light, Gene Kelly rather than Fred Astaire, and he makes space to run around the ball and land his haymakers. Schwartzman finally got him on the ropes in the eighth game, but the Spaniard dug deep to save four break points and seal the set.

There was still work to do, mind – most of it Schwartzman’s. Apparently one observer object to repeated references to his height (5ft 7in – apologies), but it is so central to his game – as it is for Simona Halep, who has to scurry rather than lope like her leggier opponents, all the way to the semi-finals again.

Schwartzman is not chunky, either, at 10 stone, so his power is hard-earned through the hips and good timing, especially against players powering the ball down at him from the skies. The pounding took its toll again in the fourth. Longer legs might have got him to the drop-shot that opened the gap further for Nadal in the fourth game. Up 3-1 after 20 minutes, he needed only to hold his concentration to move within two wins of an 11th French Open title.

In a defiant last stand, Schwartzman saved match point in the seventh game, forcing Nadal to serve it out through three break points. On his fourth opportunity to wrap it up, Nadal punched a wicked, shot forehand into the ad corner. Schwartzman had delayed him three hours and 42 minutes.

This was Nadal’s 24th win on clay this year, against a single loss. He has the momentum of an avalanche. Members of the Church of Federer are no doubt pining for the return of their leader at Wimbledon next month, but anyone who doesn’t appreciate the jungle-level ferocity of Nadal on his favourite surface at his favourite tournament clearly never saw Roberto Duran in the ring.

Nadal’s opponent will be Juan Martin del Potro, who came through a predictably attritional battle with third seed Marin Cilic in four sets. The pair were locked at 5-5 in a first-set tie-break when the rain came, and it was fifth seed Del Potro who took the first two points after the resumption to draw first blood.

After 22 games without a break of serve three came along at once, two for Croatian Cilic as he took the second set. In the third Del Potro was broken again early on but then reeled off four successive games to get his nose back in front. The fourth set went hurriedly with serve until 5-5, when Del Potro fashioned three break points.