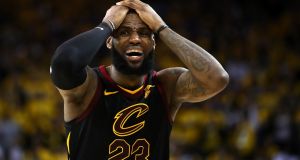 LeBron James is only player other than Michael Jordan to score more than 50 points in a finals game since 1970. Photograph: Getty Images

LeBron James said the fact that his 51-point performance in game one of the NBA Finals on Thursday ended with a Cleveland Cavaliers loss underscores just how difficult it will be to dethrone the defending champions Golden State Warriors.

James was sensational throughout the tightly contested affair which the Warriors won 124-114 when their potent offense moved up a gear in overtime.

“We understand how difficult and how challenging this task is,” James told reporters after the game, which marked the fourth consecutive year the teams have met in the Finals.

“And you wake up tomorrow with a fresh mind and you move forward.”

One thing that did not go the Cavs’ way was a blocking call on James, which officials initially ruled as a charge against Warriors forward Kevin Durant with the change of decision allowing Golden State to tie the game in the final minute.

The Cavs also had the ball with a little less than five seconds to play when guard JR Smith secured a rebound on a missed free throw but failed to get a shot off with the game tied at 107-107.

The night was a historic one for James, who is the only player other than Michael Jordan to score more than 50 points in a finals game since 1970.

His performance drew strong praise from Warriors coach Steve Kerr, who played alongside Jordan at the Chicago Bulls.

“They have a guy who is playing basketball at a level that I’m not sure anybody’s ever seen before, when you consider everything he’s doing,” Kerr said.

James, who has carried his fourth-seeded Cavs to his eighth consecutive NBA Finals, said the key to success would be staying aggressive and getting his team mates involved.

“I just try to do whatever it takes to help our team win and try to be a triple threat out on the floor offensively and being able to score, rebound, and get my guys involved,” he said

Asked if the loss was one of the most disappointing of his career in finals games, James said it probably was.

“Because it’s right now, I would say yeah because I always live in the present,” he said.

“There were just some plays that were kind of taken away from us. Simple as that.”

The Cavaliers and Warriors meet for game two of the best-of-seven series in Oakland on Sunday.