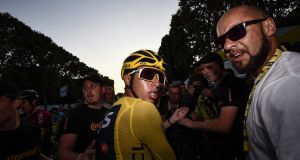 A year ago, as Egan Bernal matched the pace of Chris Froome and Geraint Thomas in the Tour de France – and left many of its big names trailing in the mountains – the 21-year-old Colombian was instantly tipped as a future Tour winner. A curious trail of fortuitous events has now propelled him to overnight stardom as his country’s first Tour de France winner and made him the probable leader of the world’s most successful cycling team – Ineos – for years to come.

Had things gone to plan, Bernal would have led Ineos at the Giro d’Italia after taking a crushing win in the first major stage race of 2019, Paris-Nice. Instead a training crash sidelined him with a broken collarbone and he was pencilled in for the Tour de France. The withdrawal of the four-times winner, Froome, left a gap alongside the defending champion, Thomas, in the Ineos hierarchy and, when Thomas fell off at the Tour of Switzerland in June, up stepped Bernal to take the third major stage race of his career.

If there is any surprise at Bernal’s victory, it is that it has taken so long for a Colombian to win the Tour. It is 44 years since Cochise Rodríguez finished the race alongside Felice Gimondi and it was 1983 when Colombians arrived en masse; a year later Luis “El Jardinerito” Herrera won the legendary stage finish at L’Alpe d’Huez and by the late 1980s there were two Colombian teams in the race, with Fabio Parra finishing on the podium in 1988.

Bernal is directly in that line, along with Oliverio Rincón, a stage winner in Andorra in 1993, and Victor-Hugo Peña, a yellow-jersey holder in 2003. He hails from the town of Zipaquirá, 30km outside Bogota and a town known for its salt industry; a cathedral built 200m underground inside one of the mines is a major tourist attraction. The town is 2,700m above sea-level; the pass leading from Zipaquirá to his mother’s home town, Pacho, tops out at 3,600m. According to his mother, Florites, young Egan set himself the target of getting there inside one hour and he would be capable of winning the Tour de France; he managed it in 56 minutes this spring.

Bernal began riding a mountain bike at seven years old; his father, Germán, had been deprived of a possible cycling career because the family’s lack of resources meant he had to go out to work. In an attempt to discourage his son from following in his footsteps he sent him on long trips on his cousin’s heavy bike but, according to his mother, that simply whetted his appetite.

As a junior he managed silver and bronze medals at the world championships; that drew the attention of the Italian talent scout Gianni Savio, a dapper little man and a fixture on the pro circuit since the 1980s, who runs the small-budget Androni Giocattoli team. On the strength of one test and a trip to Italy Savio secured Bernal on a four-year contract; under Savio Bernal finished fourth in the Tour de l’Avenir, the under-23 “mini Tour de France”, in 2016.

A year later he won the Avenir and Team Sky bought him out of his deal with Savio. Since then his rise has been meteoric. In his debut World Tour race, at the Tour Down Under, he finished sixth. He followed that with wins in the Tour of Colombia and a time-trial stage in the Tour de Romandie where he took the scalp of Primoz Roglic. En route to overall victory at the Tour of California he defeated Adam Yates in one of his two mountain stage wins.

In his debut Tour he finished 15th and not surprisingly he was rapidly put on a five-year deal rumoured to be worth £12m. “I’ve searched and searched for the rider that might be the next Chris Froome, who would be our next big leader for Grand Tours,” said the Sky, now Ineos, chief, Dave Brailsford. “My choice was Bernal.”

“I don’t know if inspired is the right word but just being around him – I’m two years older than him but it’s like being with a big champion,” his teammate Tao Geoghegan Hart said in a 2018 interview with the website cyclingtips.com . “Just the care he takes with everything.”

Bernal has gained a reputation for being calm, equable, a rider who does not look for excuses when things go wrong. He learned Italian in six months, to enable him to communicate at Androni, and English in another six after being signed by Sky.

That points to a man who may adapt better than most of his compatriots to racing in a continent away from home. The consensus is that Bernal will win multiple Tours de France, having shown such promise at such a tender age.

It is certainly true that many of cycling’s greatest champions won the Tour at a relatively young age – Merckx, Hinault, Anquetil – but the equation is more complex than it seems, however blatant Bernal’s talent may be at this stage. He has two weaknesses; he seems to crash more often than he should and he still has the occasional off-day – in the Tour it came in the time trial at Pau.

The last precocious youngster to top the Tour podium, Jan Ullrich in 1997, was a year older than Bernal, and, like the Colombian, won the Tour ahead of a teammate, Bjarne Riis, who also happened to be the previous year’s winner.

As with Bernal, Ullrich was instantly hailed as the man who would dominate the Tour for years to come. Speculation about Bernal’s future may seem premature; better to celebrate his win for what it is right now. – Guardian

1 Séamus Power huffs and puffs as Wolff blows the door down in Detroit
2 Monica Seles: The warrior queen who could have been the best ever
3 Serpentine stays on from the front to steal Epsom Derby for Aidan O’Brien
4 Eamon O’Shea: We spent quite a bit of time talking about older people rather than to them
5 Valterri Bottas pips Lewis Hamilton to pole in Austria
Real news has value SUBSCRIBE