Mark Todd announced his retirement from the sport afterwards 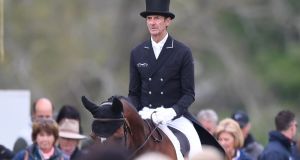 Mark Todd from New Zealand has retired from showjumping. Photo: Simon West/Action Plus via Getty Images

New Zealand, the leaders after cross-country, won the four-star Nations’ Cup at the Sema Lease Camphire international horse trials in Co Waterford on Sunday after which team member Mark Todd announced his retirement from the sport.

Todd (63), who was voted FEI rider of the 20th century, retires following a career which saw him compete at seven Olympic Games (twice in show jumping as well as eventing), winning individual gold at Los Angeles (1984) and Seoul (1988). He was a member of the gold medal-winning New Zealand teams at the 1990 and 1998 World Equestrian Games, has won Badminton four times and was successful at Burghley on five occasions.

Todd, who moved to Britain in the late 1970s, retired from international competition following the 2000 Sydney Olympics and returned to New Zealand where he competed at a local level and started training racehorses, sending out Group 1 winners in his first season. He returned to the international stage in 2008 and competed at that year’s Beijing Olympics. He is now going to concentrate on racing and currently has 10 horses in training at his Badgerstown yard on the edge of Marlborough Downs in Wiltshire.

Ireland took the runner-up spot led by the individual winner, Carlow’s Sam Watson on the ISH gelding Imperial Sky (27.70), a 13-year-old Puissance grey which is owned by the rider’s wife, Hannah, and Cathy Byrne. Also contributing to the team total of 104.9, were Co Cork’s Brian Morrison on Global Orchid (36.6) and Co Meath’s Sarah Ennis on Woodcourt Garrison. The discard score was proved by England-based Fred Scala on Everon Vivendi (56.4).

Britain’s Flora Harris was placed third individually on Amazing (30.6) with the fourth spot being occupied by Vittoria Panizzon who, riding Super Cillious (31.5), was a member of the third-placed Italian team (108).

Japan’s Kazuma Tomoto won the weekend’s CCI4*-L competition on his dressage score of 29.4 with the 10-year-old Selle Francais gelding Vinci de la Vigne while Britain’s J.P. Sheffield, a regular competitor at this event, also finished on his first phase score to land the Eventing Ireland CCI2*-S on the seven-year-old mare Hikita.

England-based Australian Kevin McNab, another who competes annually at the Co Waterford fixture, won three of the seven international classes – the CCI3*-S on the ISH gelding Fernhill Tabasco, the CCI2*-L with the ISH mare Ballycapple Whisper and the CCI2*-S for young horses with Vidalgo. Co Cork’s Sian Coleman moved up from second after dressage to win the CCI3*-L on the eight-year-old Contender mare Lady Baton Rouge which is owned by her breeder, Kate Jarvey.

Late on Sunday, Horse Sport Ireland’s eventing team manager Sally Corscadden commented: “This was a great result on home soil against a very experienced Kiwi team and another brilliant win for Sam Watson. Also it’s great to see new combinations coming through at this level and especially pleasing for Sian Coleman and Kate Jarvey to win the CCI3*-L class.”

At the Burgham international event in the north of England, Ireland’s Tony Kennedy completed in ninth place in the CCI4*-S on the one-eyed Westeria Lane. The Co Meath rider, who had eight show jumping penalties, was the only one to go clear within the time across the country on his 14-year-old Rantis Diamond gelding for a three-phase total of 42.

In the CCI3*-S at the same venue, a pole down show jumping proved expensive for Co Down’s Susie Berry as, on a score of 30.1 penalties, she partnered Helan Caton’s ISH gelding John The Bull to finish second behind Britain’s Piggy French riding Highdown March (29.7).

In show jumping, England-based Michael Duffy was the only Irish rider who progressed to the jump-off round of Sunday’s five-star Longines BHS King George VI Gold Cup at Hickstead. In the ring, Duffy finished second with Jessie Drea and Lynne Humphries’s ISH gelding Mullaghdrin Touch The Stars but, before the presentation, was eliminated under the FEI blood rules and dropped to fifth. The 1.60m class was won by Germany’s David Will on Never Walk Alone.

At the three-star show in Bromont, Canada, Derry’s Daniel Coyle partnered his own Irish Sport Horse mare CHS Krooze into second place in Sunday’s 1.55m Grand Prix which was won by the host nation’s Ali Ramsay on Lutz.

1 Eamon O’Shea: ‘We spent quite a bit of time talking about older people rather than to older people’
2 Monica Seles: The warrior queen who could have been the best ever
3 Matt Williams: Six Nations must recognise the desire for revolution outside Europe
4 Sport crosses its fingers yet again as ministerial merry-go-round gets another spin
5 The Best of Times: Ireland women’s hockey team’s World Cup fairytale
Real news has value SUBSCRIBE